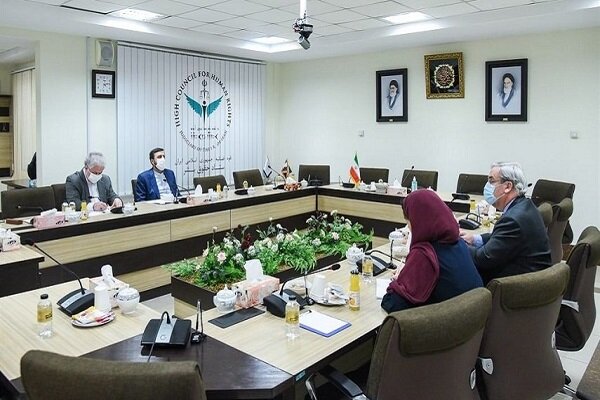 Senior officials from Iran and Finland have emphasized the need to step up the fight against terrorists and expand bilateral relations in the legal and judicial areas.

Kazem Gharibabadi, the Iranian Judiciary chief’s deputy for international affairs and secretary of the coutry’s High Council for Human Rights, held a meeting on Wednesday with the visiting director general of the Finnish Foreign Ministry’s Department for Africa and the Middle East, Sofie From-Emmesberger.

In the talks, Gharibabadi outlined Iran’s policies on human rights and the country’s judicial diplomacy, expressing Tehran’s readiness for talks with Helsinki on the issue of human rights and legal-judicial cooperation with the Northern European state.

He criticized the double-standard and selective approach adopted by certain countries vis-à-vis the issue of human rights and said, “Unfortunately some states use human rights as a political tool against others.”

The Iranian official expressed hope that Finland will adopt a “professional and independent” stance during its first full membership (2022-2024) in the UN Human Rights Council.

The two sides also stressed the necessity of countering terrorism, as a threat to global security, and supporting vulnerable groups of people, such as women, children and individuals with disabilities.

The Finnish Foreign Ministry official also thanked Iran for throwing its weight behind Finland’s membership in the Human Rights Council.

She also said her country welcomed the expansion of expert talks in the legal and judicial sectors and an exchange of relevant experience between the two states.