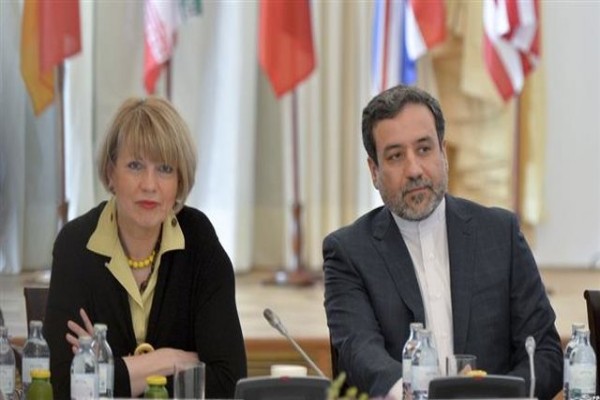 Secretary General of the European External Action Service Helga Schmid and Iran’s Deputy Foreign Minister for Political Affairs Seyyed Abbas Araqchi have discussed a range of issues in a meeting in Tehran.

The two sides discussed the latest developments of the Iran nuclear deal and the implementation of the EU’s initiative to save the deal known as the Instrument in Support of Trade Exchanges (INSTEX).

They also conferred on the US sanctions against the Islamic Republic, and the EU’s efforts to help Tehran reap the benefits of the JCPOA.

Back on Wednesday, before starting her visit to Tehran, Schmid described the Iran nuclear deal as “the key to the Middle East’s security and stability” and said during her stay in Tehran she would hold talks with Iranian officials on the latest developments of the JCPOA as well as the implementation of the INSTEX.

She arrived in Tehran as the fourth leg of her regional tour which took her to the UAE, Oman and Qatar.

“I will discuss the implementation of the JCPOA as well as the INSTEX with the aim of preparing the ground for normalizing our economic ties with Iran,” she noted before arriving in Tehran.

Following the US unilateral withdrawal from the Iran nuclear deal back in May 2018, the future of the multinational deal has been cast in doubt.

Iran had called on the remaining signatories of the deal to take some concrete measures after one year so that the Islamic Republic could benefit from its economic share under the JCPOA. To this end, Iran has given them a two-month deadline, saying if no measure is adopted, it would scale back its commitments under the deal.