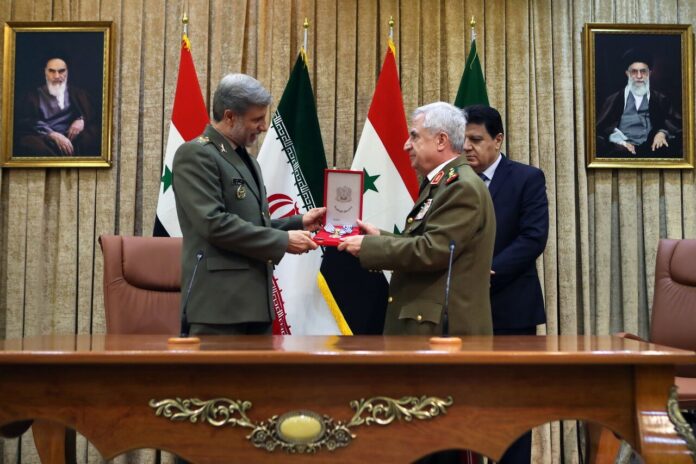 Defence Minister of Iran Brigadier General Amir Hatami has called for sustained opposition to the presence of American military forces in the region.

In a meeting with his Syrian counterpart General Ali Abdullah Ayyoub, held in Tehran on Monday, the Iranian Defence Minister expressed gratitude to the Syrian authorities for their sympathy with Iran over the martyrdom of top Iranian commander Lt.

General Qassem Soleimani and a number of forces of the axis of resistance, who were assassinated in a US drone strike on January 3.

Brigadier General Hatami emphasized that the axis of resistance will keep going on after the martyrdom of the late Iranian commander, because resistance has turned into an “ideology and discourse across the region.”

Without the efforts by Lt. General Soleimani and his comrades, including the Syrian Armed Forces and people, the ISIS terrorist group would have definitely conquered the region, the Iranian minister added, stressing that Europe, Asia and the Americas owe their security to the late Iranian commander’s devotion.

“He (Soleimani) used to fight for peace. His capabilities and faith alone were deterrent factors against the excessive demands and the hegemony of the Western powers and the Zionist regime,” Hatami added.

Denouncing the US assassination of Lt. General Soleimani as a thoughtless move, the Iranian Defence Minister said US President Donald Trump made a miscalculation, was wrong to believe that elimination of a person would stop the axis of resistance, and increased the costs of presence of American forces in the region by taking such measure.

The opposition to the presence of US military forces in the region needs to become a constant and sustainable process, Brigadier General Hatami added.

He also described Iran’s retaliatory missile attack on America’s Ain al-Assad military base in Iraq as only a prompt action, stressing that the least that the public demands following the assassination of Lt. General Soleimani and deputy of Iraq’s PMU forces Abu Mahdi al-Muhandis is the withdrawal of US forces from the region.

The minister further reaffirmed Iran’s commitment to supporting the axis of resistance, and pledged that the Islamic Republic will stand by Syria in the era of reconstruction, like the time of war, and considers backing Syria as a “religious duty that contributes to regional stability.”

The Syrian Defence Minister, for his part, paid tribute to Lt. General Soleimani for his sincere and altruist efforts in the battlefield and in the war against terrorists, saying he got to know the popular Iranian commander when the criminal terrorist groups had occupied large parts of Syria.

General Ayyoub also lauded Lt. General Soleimani for his supports for the oppressed people of Syria, saying the late commander’s strategic views and tactics in Syria’s battlefields were always helpful for the Arab country’s commanders and nation.

He further praised General Soleimani as an exemplary role model for the axis of resistance’s youth and for Syrians, saying the late commander’s name will go down in history.

Ayyoub finally awarded Syria’s top medal of honor, on behalf of Syrian President Bashar al-Assad, to Lt. General Qassem Soleimani, asking the Iranian Defence Minister to present the medal to the family of the revered martyr.