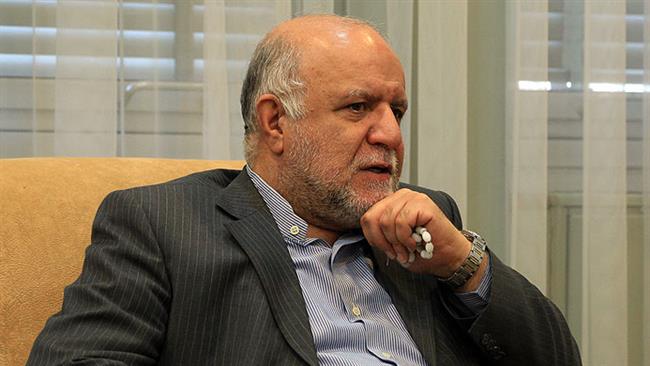 Iran's oil minister says the Islamic Republic is determined to reclaim its share in global oil markets once sanctions imposed on the country’s energy sector are lifted.

“Immediately after lifting sanctions, it’s our right to return to the level of production we historically had,” Bijan Zangeneh said, adding, “We have no other choice.”

The Iranian minister made the remarks in an interview with Bloomberg, which was published on Wednesday, at the Iranian Oil Ministry in Tehran.

Iran lost part of its share in the global oil market after sanctions were imposed on the country by the United States and the European Union at the beginning of 2012, with Western countries claiming that there was diversion in Iran’s nuclear program toward military purposes. Iran rejected Western countries’ claims categorically, insisting that its civilian nuclear program was only meant for peaceful purposes.

Iran reached an agreement with the P5+1 group of countries – the US, the UK, France, Germany, China, and Russia – in Vienna on July 14, known as the Joint Comprehensive Plan of Action (JCPOA). According to JCPOA, sanctions against Iran’s economic sectors, including oil and gas industry, will be lifted in return for certain restrictions on Tehran’s nuclear program.

Elsewhere in his interview, Zangeneh said Iran plans to produce 3.8-3.9 million barrels per day (bpd) of oil by March 2016.

He noted that the country will raise its output by 500,000 bpd soon after sanctions are lifted and by 1 million bpd within the following five months.

He added that Iran’s oil output currently stands at 2.8 million bpd, which is the highest level the country has achieved in three years, and is exporting more than 1 million bpd.

Referring to the drastic oil price fall in global markets, the Iranian oil minister emphasized that the oil price slump will not slow Iran’s return to the market.

Oil has dropped by about half in the past year from more than USD 100 a barrel in September 2014 after the 12-member Organization of the Petroleum Exporting Countries (OPEC) decided during meetings in December 2014 and June 2015 not to reduce output despite a global crude glut.

In another part of his interview, Zangeneh said most OPEC members would like to see crude prices at $70-$80 a barrel and the organization does not need to coordinate with other oil suppliers to determine output levels.

An oil price at $70-$80 a barrel would be “fair,” he said, adding that OPEC is open to coordinating its action with non-members, although it won’t wait for others to determine or approve its action.