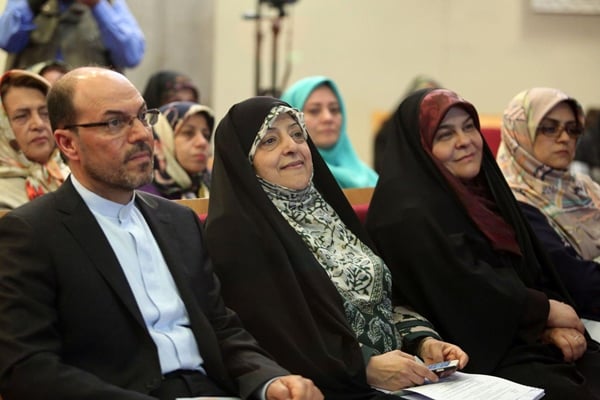 The Iranian government has undertaken several measures to empower women and enhance their activities in social arenas and management, in the hope it will help accelerate the development of the country, a senior official says.

“The Islamic Republic of Iran is determined to help boost participation of women in the job market as part of five-year development plans,” said Gholam-Hossein Dehqani, the Iranian deputy foreign minister for legal and international affairs.

Speaking in a workshop held last week in Tehran on challenges to boosting women entrepreneurship in Iran and Japan, Dehqani said women play an important role in the global trade and there is no reason they cannot play the same role in Iran.

Dehqani said the government is working to provide women with appropriate job opportunities, support equality in wages for men and women, protect security and health of women in the workplace, help them maintain life-work balance and set heavy punishment or those who harass female workers.

Moreover, the diplomat said the government is working to facilitate women’s access to internet and technology, a report by women.gov.ir said.

The deputy foreign minister said the Iranian parliament has also enacted legislations aimed at empowering women, including a bill to protect women from violence.

Dehqani said the Iranian government will remain faithful to its obligations to improve the status of women within the Islamic context, expressing hope Iran and Japan will expand cooperation on issues related to women’s entrepreneurship and will be able to help boost the role of women in the society and family.

Massoumeh Ebtekar, the Iranian vice-president for women and family affairs, told the same gathering that the incumbent administration has put boosting women entrepreneurship on its agenda, as Iranian women are highly educated and capable of participating in economic activities.

“A big part of Iranian women holds university degrees. Besides that, the number of women studying at universities is more than men in all majors except for engineering ones,” she said.

However, Ebtekar said women have less participation in the job market, a problem that needs to be fixed.

She expressed hope the conference, aimed at transferring experience between the two countries on women entrepreneurship, will help improve conditions of women in Iran and Japan.

The workshop was held by Iran’s Vice-Presidency for Women and Family Affairs, Japan’s Sasakawa Peace Foundation, Iran’s Foreign Ministry and the National Library of Iran.

Executive Director at the Sasakawa Peace Foundation Junko Chano said Iran and Japan will form a joint research team to explore and assess the situation of women entrepreneurship in Iran and Japan and come up with solutions to improve them.

The Sasakawa Peace Foundation, an affiliate of Nippon Foundation, is a public foundation corporation that conducts research activities, policy recommendations, and international collaboration aimed at the formation of a new governance system of human society that is more sustainable for environment, oceans, and human welfare.

The foundation has been involved in several projects to promote mutual trust and understanding between Iran and Japan.

The two countries have held two rounds of a joint symposium in 2016 and 2017, which provide a platform for cooperation between the two nations in areas such as economic empowerment of women, introducing successful models of entrepreneurship and supportive government policies.