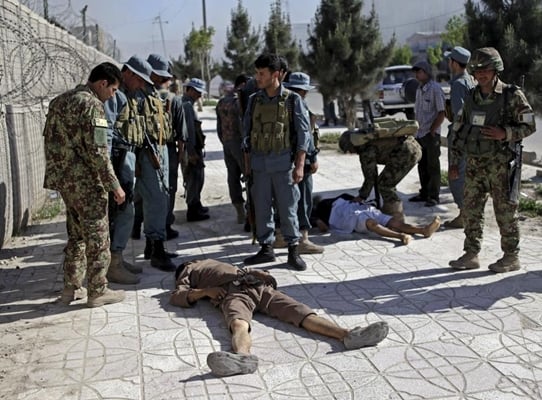 Iranian Foreign Ministry Spokesman Bahram Qassemi has blasted certain efforts to divert the Afghan nation’s attention from the main causes of the perpetuation of war in the country by levelling unsubstantiated accusations against the Islamic Republic of Iran.

“After years of military presence in Afghanistan and shedding the blood of thousands of innocent Afghans, today the US commanders who have failed to establish security in the country are attempting to divert the attention of Afghan people from the main causes of the continuation of war in the country by accusing Iran of supporting Taliban,” he noted.

The spokesman also underlined that the Taliban attacks on Afghan cities and their retaking by government forces are not a new subject and have nothing to do with the good relations underway between Tehran and Kabul.

Over the past four decades, he said, the Islamic Republic of Iran has stood firmly behind the government and nation of friendly and brotherly country of Afghanistan to defend their independence and sovereignty.

“Therefore, remarks made to appease foreigners and aggressors stand in contradiction with the friendly ties.”

The spokesman said talks are underway between Iranian and Afghan governments to resolve an ongoing water dispute through diplomatic channels. “Linking the water dispute to Afghanistan’s domestic issues has no reasonable and logical basis.”

Qassemi once again condemned violence in Afghanistan and said as in the past, the Islamic Republic throws its weight behind the peace process in Afghanistan to lead Afghan government and other conflicting sides in the country to the negotiating table for tackling the current problems.

Afghanistan’s western Farah province was the scene of fierce fighting between the Taliban and the Afghan government in recent days. Some Afghan officials blame Iran for the unrest.

Meanwhile, General Gul Nabi Ahmadzai, the former Afghan border police chief, told VOA that Iran’s support for the Taliban is not a secret. “Iran is directly involved, and its Revolution Guards commanders are leading the fire-fight in Farah,” Ahmadzai said.

Some other Afghan officials charge that Iran is ratcheting up its support for the Taliban to disrupt developmental projects in Afghanistan, including water dams, which if completed would slow down the flow of water to Iran.