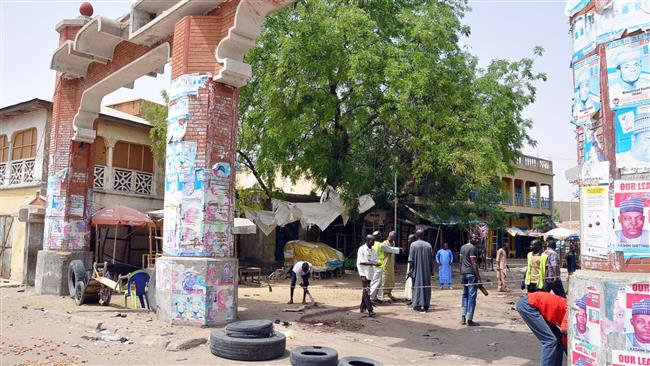 Iran has condemned deadly triple bomb blasts in Nigeria’s northeastern city of Maiduguri in Borno State, underscoring the need for peace and security in the restive African country.

At least 58 people were killed and 139 wounded in three separate bomb attacks in Nigeria’s northeastern city of Maiduguri on Saturday.

The first attack took place at the Baga fish market which was followed by the second and third blasts that respectively hit the Monday Market and a busy Borno Express bus station.

No one has so far claimed responsibility for the deadly explosions but they bear the hallmarks of the attacks by Boko Haram Takfiri militant group.

The terrorists have recently increased their bombings and village attacks as Nigerian and Chadian forces have pushed them out of a score of towns along Nigeria’s border with Cameroon.

Boko Haram, whose name means “Western education is forbidden,” controls parts of northeastern Nigeria and says its goal is to overthrow the Nigerian government.

It has claimed responsibility for a number of deadly shooting attacks and bombings in various parts of Nigeria since the beginning of its militancy in 2009, which have left over 13,000 people dead and 1.5 million displaced.