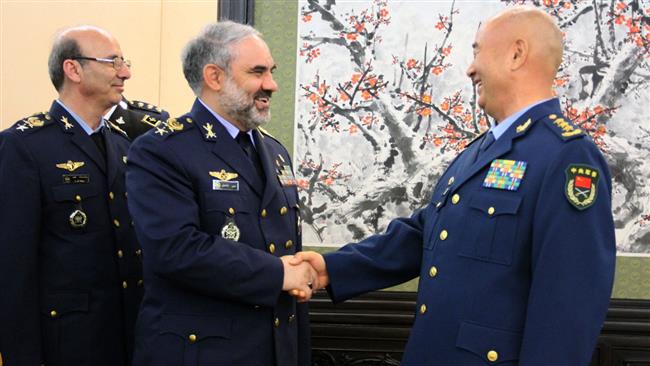 The armed forces of Iran and China should work toward strengthening cooperation in all areas of common interest, the Iranian Air Force commander told his Chinese counterpart.

Air force commanders of Iran and China have stressed the importance of bolstering strategic cooperation in a bid to improve regional and international peace and stability.

Commander of the Islamic Republic of Iran Air Force (IRIAF) Brigadier General Hassan Shah Safi, who is on an official visit to China at the head of a high-ranking military delegation, held a meeting with Ma Xiaotian, a member of China’s Central Military Commission and commander of the Chinese People’s Liberation Army (PLA) Air Force.

Shah Safi said the armed forces of Iran and China should work toward strengthening cooperation in all areas of common interest.

“We believe that these relations, in addition to serving the two sides’ interests, can guarantee peace, stability and security in Asia and even across the world,” the Iranian commander said.

He added that Tehran and Beijing are pursuing common goals such as independence and non-interference in the internal affairs of other countries.

The Chinese commander, for his part, said continued mutual relations will contribute to global peace and stability.

He added that Iran and China should do more to improve military cooperation.