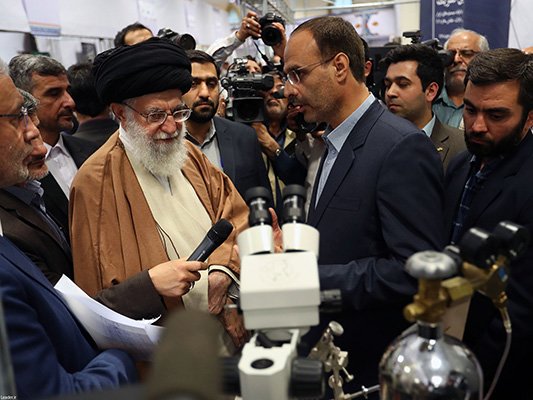 Leader of the Islamic Revolution Ayatollah Seyyed Ali Khamenei has hailed Iranian producers and workers for their being able to produce high-quality products despite international pressure and sanctions on the Islamic Republic of Iran.

In an address to a group of Iranian workers on Monday, the Leader referred to his Sunday visit to an exhibition of Iranian products in Tehran and voiced his satisfaction with the quality of domestically-made goods displayed in the exhibition.

“I visited a small exhibition of domestically-produced goods. I made a tour of the exhibition for some hours. I saw your products. You deserve high praises for your high-quality products,” he noted.

Ayatollah Khamenei underlined that despite problems created by the arrogant powers which have imposed sanctions on Iran hampering imports of raw material and advanced machinery, the Iranian producers have managed to make goods with high quality.

“When I named this year as the Year of Support for Iranian Products, many took it with deep doubt, many others didn’t confirm it and never took any step to translate it into reality. Support for national products means support for the Iranian producers and workers. This is an all-out support. The government and the nation should offer their support in this regard,” he noted.

The leader visited the exhibition on the occasion of the International Labour Day. The exhibition showcased a wide range of domestically-produced goods from home appliance, stationery, clothes, and textile to foodstuff, medicine, medical equipment, cosmetics, auto-parts, and industrial and construction equipment.

During his tour of the exhibition, the Leader also listened to producers talking about their problems and issued necessary orders to relevant officials to resolve the problems.

In his annual speech at the beginning of the new Persian Year, Ayatollah Khamenei named this year as “The Year of Support for Iranian Products” and expressed hope that the country’s economic issues could be resolved through promotion of “domestic production”.