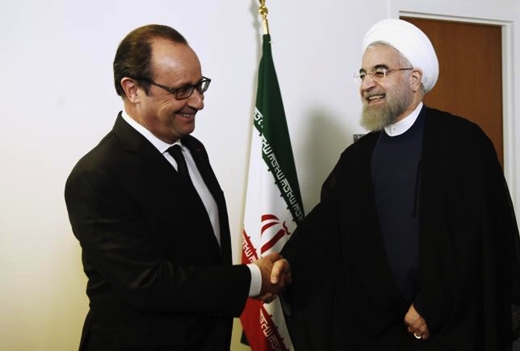 The two presidents held talks on the sidelines of the 70th session of the United Nations General Assembly in New York.

French President Francois Hollande has said Iran can be a “facilitator” in a political solution to the ongoing crisis in Syria, a French diplomat says.

The diplomat whose name was not revealed said Hollande made the remarks during a meeting with his Iranian counterpart Hassan Rouhani in New York on Sunday.

“Iran is a player [in the region], but also a facilitator,” the unnamed French official said.

The official, however, added that Hollande said “the question of [Syrian President Bashar] Assad could not be offered as an answer.”

The two sides held talks on the sidelines of the 70th session of the United Nations General Assembly in New York.

On September 24, German Chancellor Angela Merkel said Tehran and the Assad government must be part of negotiations aimed at resolving the crisis in Syria.

“We have to speak with many actors; this includes Assad, but others as well. Not only with the United States of America, Russia, but with important regional partners, Iran, and Sunni countries such as Saudi Arabia,” Merkel said.