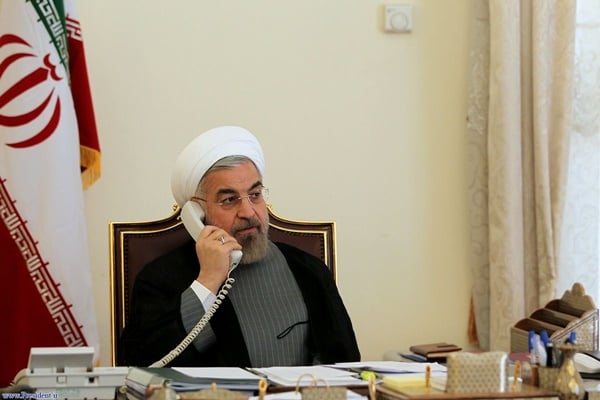 Iranian President Hassan Rouhani has called for further unity among Islamic states in the face of the inhuman moves by the US and the Zionist regime.

In a Wednesday phone conversation with his Turkish counterpart Recep Tayyip Erdogan, Rouhani described the latest massacre of Palestinians by the Zionist forces in Gaza on the 70th anniversary of Nakba (Catastrophe) Day as tragic and moving and called on the international bodies to stand by Palestinians.

“The UN and the Organization of the Islamic Cooperation (OIC) should fulfil their duty to put their weight behind the oppressed nation of Palestine at this critical time,” he said, according to a report by the Iranian President’s website.

He condemned the US move to relocate its embassy from Tel Aviv to Jerusalem al-Quds saying the illegal move provoked outrage among the Palestinians and upset the Islamic states.

President Rouhani said the US administration and the Zionist regime should be held accountable for the massacre of people in the region and said “unfortunately, the US president has made grave miscalculation about regional issues thinking that it can put down Palestinian uprising by supporting the Zionist regime.”

He then referred to the upcoming emergency meeting of the OIC in Istanbul and said “we should have our unified voice against the US and Israel heard across the world.”

For his part, the Turkish president called the latest massacre of Palestinians in Gaza by Israeli forces deplorable and added the US policies should be blamed for triggering the heinous crimes.

He officially invited his Iranian counterpart to attend the OIC summit in Istanbul and said the Muslim world should unanimously follow up the plight of the Palestinians in the international arenas.

Erdogan underlined that any peace initiative which ignores the concerns and demands of the Palestinians is doomed to failure and will lead to further tensions and chaos.

Back on Monday, Israeli forces killed at least 62 Palestinians during protests near the Gaza fence on the eve of the 70th anniversary of the Nakba Day, which coincided this year with Washington’s embassy relocation.

More than 2,700 Palestinians were also wounded as the Israeli forces used snipers, airstrikes, tank fire and tear gas to target the demonstrators.