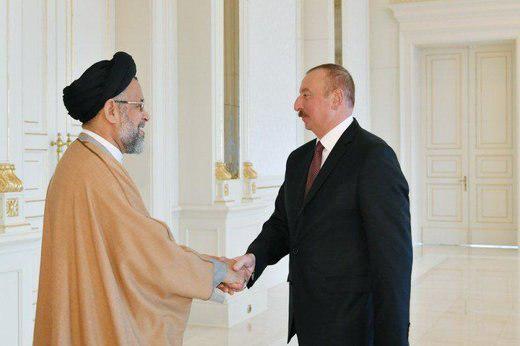 Iranian intelligence minister and the president of Azerbaijan Republic have praised the currently high level of ties between Tehran and Baku, and explored avenues for further promoting bilateral relations,.

In a Friday meeting with Intelligence Minister Seyyed Mahmoud Alavi, Azerbaijani President Ilham Aliev stressed that the ties between the Republic of Azerbaijan and Iran are developing successfully.

Referring to his numerous trips to the Islamic Republic of Iran, he added that the high-level visits of the Iranian president and authorities to Azerbaijan have played a significant role in strengthening the mutual relations.

The Azeri president also talked about the historic commonalities of the two countries and added that the ties between the two friendly states have expanded.

Agreements signed between Baku and Tehran are being implemented successfully, noted Aliev.

He also gave assurances that the visit of Iranian Intelligence minister to the Republic of Azerbaijan helps in development of bilateral ties, especially in the field of intelligence sharing.