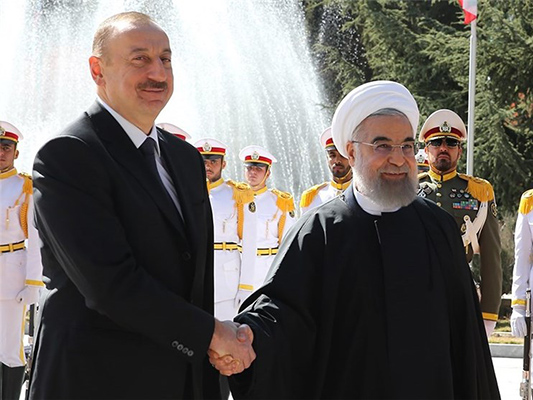 President of Azerbaijan hailed the considerable promotion of Tehran-Baku ties in the past four years, and called for enhanced regional cooperation between the two neighbouring states.

In a telephone conversation with Iranian President Hassan Rouhani on Monday, Azerbaijan’s President Ilham Aliyev said relations between Tehran and Baku had always been expanding, but the past four years had been a remarkable period for both countries.

He urged the two countries’ officials to implement all agreements previously signed, saying that a railway contract would also be inked between Tehran and Baku in the near future.

Aliyev further stressed the importance of enhancing bilateral cooperation on regional developments, particularly the regional stability and security as well as the joint fight against violence, extremism and terrorism, Press TV reported.

Rouhani, for his part, said the Islamic Republic and Azerbaijan enjoy very good potential for developing relations in various fields.

He went on to say that the firm determination of the Iranian and Azeri governments and deep commonalities between the two nations had laid the groundwork for strengthening mutual relations in all fields.

He emphasized that no obstacle could hinder the expansion of political, economic, trade and cultural cooperation between the two countries, saying that the speedy implementation of agreements could further increase the level of bilateral and regional relations.

The Iranian president also called for collective efforts to fight terrorism and extremism and foster unity among Muslim countries, stressing the importance of eliminating the ideological roots of extremism in Muslim states.

Earlier in the day, the Iranian president had sent a congratulatory message to Aliyev on the occasion of Azerbaijan Republic’s national day.