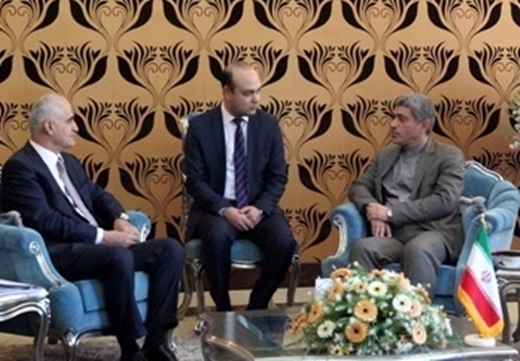 Termination of sanctions after the conclusion of a nuclear deal between Iran and P5+1 has prepared the ground for expansion of economic cooperation between the two countries, said Tayyebnia.

The two ministers called for expansion of cooperation in banking and insurance sectors as well as increasing trade and investment between the two nations.

Termination of sanctions after the conclusion of a nuclear deal between Iran and P5+1 has prepared the ground for expansion of economic cooperation between the two countries, Tayyebnia said.

To that end, expansion of banking and insurance cooperation should be put on the agenda, said the Iranian minister.

Establishment of a customhouse bridge between Iran and Azerbaijan over the Aras River to ease trade exchanges was on the agenda of the talks between the two sides, he said.

The Azeri minister, for his part, referred to his 30-member delegation comprising the state-run and private sectors, saying, it shows the extent of eagerness on the part of Azerbaijan to broaden the level of relations and cooperation with the Islamic Republic of Iran.

Congratulating the Islamic Republic of Iran for its significant triumph in nuclear talks, he said all countries in the region will benefit from such great achievement.