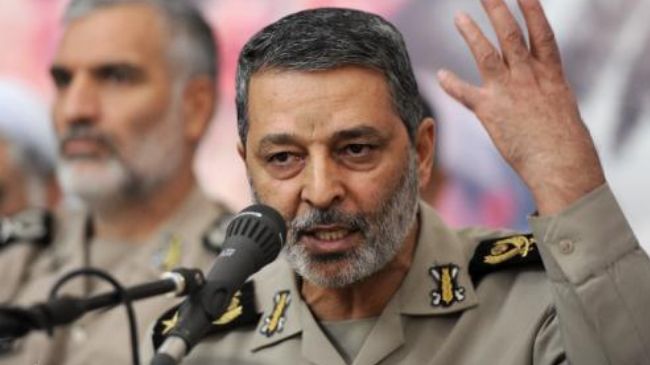 “The massive drill by the Army will be held from December 25 to 31,” the Second-in-Command of the Iranian Army Brigadier General Abdolrahim Mousavi said on Thursday at a press conference, adding, “The Army’s Navy, Air Force, Ground Forces and Air Defense will participate in the maneuvers.”

“New weapons and tactics will be tested and evaluated in the war games,” Mousavi said, adding the drill will also feature exercises on fighting terrorism.

“The show of lasting might, peace, and friendship under the banner of Islamic and regional unity” is the motto of the maneuvers, said the general, adding Iran is “opposed to the presence of foreigners in the region.”

It falls upon regional countries to establish peace and security in the region, he stressed.

The Army’s decision to practice fight against terrorism comes as the scourge poses a threat to the whole Middle East region.

Iran’s Navy Commander Rear Admiral Habibollah Sayyari also said at the press conference that the military’s missile capability will also be tested in the drill by “launching surface-to-surface, surface-to-sea, surface-to-air and air-to-surface missiles.”

In recent years, Iran has secured great accomplishments in its defense sector and attained self-sufficiency in producing essential military equipment and systems.