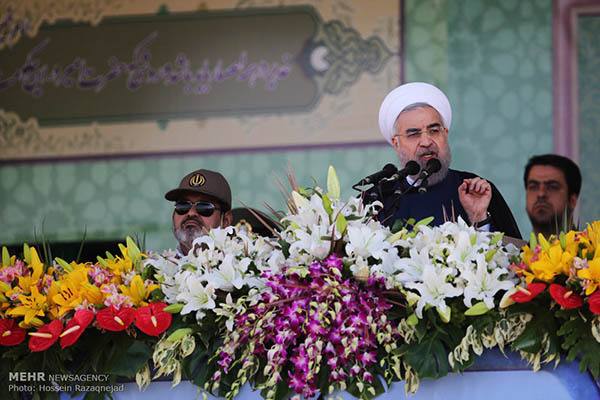 Iranian President Hassan Rouhani says the armed forces of the Islamic Republic of Iran are the biggest anti-terrorism force.

“We tell the world today [that] the biggest anti-terrorism force is the armed forces of the Islamic Republic,” President Rouhani said.

He made the remark in a ceremony Tuesday marking the anniversary of the day the regime of the slain Iraqi dictator Saddam Hussein invaded Iran back in 1980 which marks the beginning of Sacred Defense Week in Iran.

Military top brass, the military attachés of foreign countries and a number of families of the war martyrs and veterans were also present at the ceremony.

“Just as we have helped the governments of Syria and Iraq against terrorism, upon requests from their governments, if, heavens forbid, terrorism emerges in other neighboring countries, the governments of those countries will pin their hopes on the armed forces of the Islamic Republic of Iran,” President Rouhani said.

Pointing to the Iran-Iraq War in the 1980s, President Rouhani said Iranian people displayed unprecedented unity during the eight-year war.

After the 1979 Revolution that led to the establishment of the Islamic Republic, President Rouhani said, the country was accused of being a fundamentalist system seeking to impose its will on its neighbors and other countries.

“In the [Iraqi-]imposed war [on Iran], it was proved who the invader was, which ideology sought to invade and meddle in the internal affairs of other countries, and who those people are who have no mercy not only on neighboring nations but also on their own people,” the president said.

Strong faith in God was a prominent feature of the Iranian soldiers and commanders, he said.

Iran did not have an intention to invade another country; it sought peace with neighbors; but, hegemonic powers convinced a neighbor to invade Iran in the hope that they could defeat the Islamic Republic, which had just emerged from a revolution, the Iranian president said.

The president referred to Iran’s recent nuclear negotiations with P5+1, and said the unity of the people, the expertise of the Iranian diplomats and the guidance of Leader of the Islamic Revolution Ayatollah Seyyed Ali Khamenei led to the agreement that secured the rights of the Iranian nation.