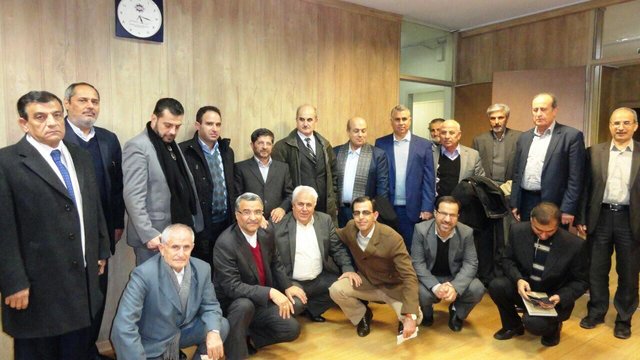 In a recent meeting between a Syrian academic delegation and an Iranian official, the two sides talked about joint academic plans for the future.

According to a Farsi report by ISNA, Hani Shaban, the president of Tishreen University in Latakia, Syria, recently visited Iran along with a delegation including the heads of its faculties.

After a series of specialized meetings in Isfahan University and signing an academic agreement with this university, they went to Tehran to meet Abbas Khameh-Yar, a Deputy Head of the Islamic Culture and Relations Organization (ICRO).

“Looking at Syrian war from a cultural point of view, we should ask ourselves as witnesses why no one takes care of museums and monuments of Islamic countries during the conflicts,” Kameh-Yar noted during the meeting.

Khameh-Yar went on to say that more than 60% of Islamic and national Syrian antiquities have been destroyed during the 6-year war in this country. “The enemies of Muslim community have planned to annihilate the Islamic history.”

He then offered a report on the activities of Iranian Cultural attachés in all continents.

Mentioning the efforts made by ICRO to promote Persian language and literature in the world, especially in Syria, he said, “As there is no financial interest in learning Persian, the foreigners who learn this language are mentally attracted to it.”

“Despite all unjust sanctions developed countries imposed on Iran, we have made remarkable progress in nanotechnology, nuclear technology and manufacturing subway trains,” he noted.

Khameh-Yar also pointed to the increased number of Iranian students, which used to be 75,000 in last years before 1979 Islamic Revolution, and is now increased to 4.4 million.

Hani Shaban, the president of Tishreen University, said for his part, “We are resolved to write our own history based on gallantry of our youths. We don’t let strangers interfere in our affairs.”

“While regional media, particularly in Persian Gulf states, makes propaganda against Iran, we owe our survival to Iranian administration and people. The majority of Arab states turned against Syria, even became our worst enemies. Meanwhile our Iranian brothers stood firm beside us. Syria will always be fond of Iranian people and government. I say it wholeheartedly, not merely as an authority.”

Expressing his hopes about developing academic relationships and cooperation between Iran and Syria, he talked about demands of Tishreen University for exchange of professors and students and establishing a department for Persian language and literature.

Later in the meeting, Mehrdad Rakhshandeh, the head of the Academic Cooperation Development Centre of the ICRO, briefly introduced the activities of this centre and announced its preparation for development of joint projects with Syria, including cooperation in offering study opportunities and scholarships, hosting academic boards, running courses of Islamic and Iranian studies in Syria, sending Iranian professors to Syrian universities in case of their request, and any other academic/scientific measure to solidify the relationship between Iran and Syria.

Also in the meeting, Amir Pour-Pezeshk, the director of representatives in Saadi Foundation – a centre for global teaching of Persian language – talked about the activities of this foundation.

“Iranians’ empathy with Syrian people comes from the doctrine of Saadi, the great Iranian poet, after whom is named our centre.”

He went on to say that Saadi Foundation is prepared to collaborate with Syrian universities on different levels, whether the activities are to be coordinated within the centre, or be jointly projected with other organisations such as Iranian Ministry of Science, Research and Technology.

“The measures included founding the departments of Persian language in Syrian universities, running Persian courses, and offering synergy courses in Iran and Syria, even through cyberspace.”

At the end of meeting, the head of Faculty of Languages and Humanities of Tishreen University thanked Iranian parties. Introducing the activities of this faculty, he expressed his desire to establish the department of Persian language there.

Other guests attending the meeting included Mostafa Omidi, the head of the Arab Middle East and North Africa Office, and Alireza Fadavi, the expert responsible for the development of cultural relations with Syria.