Iran and Saudi Arabia; will protocols lose their significance again? 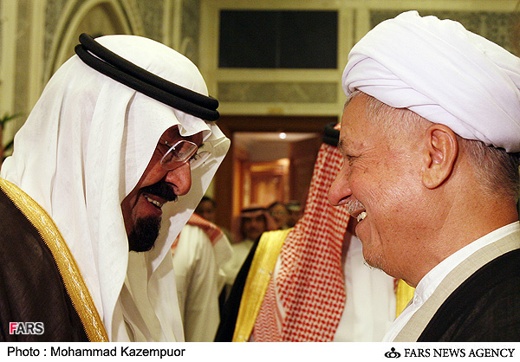 The Expediency Council chairman says the issues between Iran and Saudi Arabia should be addressed and the two countries should return to where they were.

Recently, a former US congressman – Jim Slattery who visited Iran in December –described a lack of understanding of and interpersonal relationships between US and Iranian officials as one reason why tensions are still simmering in ties between Iran and his respective government.

Interpersonal interests should be taken into account as a key principle when it comes to establishing ties between two nations in the West and East with two different cultures. The lack or existence of interpersonal understanding and interests between politicians and rulers in Eastern countries has played a major role in the animosity or friendship between their governments. There is plenty of historical evidence to confirm such an assertion.

Hashemi Rafsanjani in Iran is known to be key to reopening ties with Saudi Arabia. On several occasions, the question of mediation by the veteran politician has been raised to make Saudi Arabia return to the path of interaction with the Islamic Republic; in reaction, Ayatollah Hashemi has implicitly and explicitly tied the accomplishment of such a key mission – which is meant to restore regional calm – to being given full powers.

As a man in the capacity of the chairman of the Expediency Council and as an age-old friend of the Leader of the Islamic Revolution, what powers does he seek that he lacks now?

The answer to this question is not clear. Ayatollah Rafsanjani’s remark can signify the complexity of a mystery and the Gordian knot in ties between Iran and Saudi Arabia which are two political and ideological heavyweights in the region.

Under normal circumstances it is hard to put ties between two countries back on track. In the case of Iran and Saudi Arabia, two major world players, it would be doubly difficult to promote ties to a level in which their strategies in dealing with regional issues and their decisions at OPEC could turn the Middle East into a safe and powerful region.

In the eyes of Hashemi Rafsanjani, a veteran pragmatic Iranian politician, it is a feasible task to make the impossible possible providing that the two sides share a [political] will.

Mehr News Agency and Tehran Times, an English-language daily, have jointly conducted a detailed interview with Ayatollah Akbar Hashemi Rafsanjani. The original text in Farsi was released by mehrnews.ir in two parts under the headings “Domestic and Foreign Issues” on February 22 and 23.

One question in the second part elaborates on ties between Iran and Saudi Arabia. IFP has chosen and translated this question which features a first person account of the history of warm relations between Hashemi Rafsanjani, a onetime Iranian president, and the late King Abdullah of Saudi Arabia.

Although Ayatollah Rafsanjani leads off his remarks with an expression of regret over “soured relations”, he is openly hopeful about mending fences between the two countries and is not pessimistic about the contribution by Saudi King Salman to the reopening of a friendly chapter between Tehran and Riyadh. The following is the translation of what Ayatollah Rafsanjani said in part of the interview:

A lot of ambiguity has surrounded Tehran-Riyadh relations. The demise of King Abdullah and a recent slump in oil prices have compounded things. What is your take on the state of ties between the two nations and in fact how can the relations be mended?

The general state of affairs was not worse until recent comments, which were made at Tehran Friday prayer sermons, caused things to take a twist for the worse. […]

In pre-revolution Iran, Tehran and Riyadh were at odds over a number of issues including oil, and they kept wrangling. After the revolution, they were initially fearful of our revolution, particularly because back then we kept chanting slogans about exporting the revolution. That had prompted some nations to consider following in Iran’s footsteps. The Saudis were concerned and their relations with us were anything but good. That lasted until I took office.

During the Iran-Iraq war, they stood by Saddam, financially supported him and their airspace was at Saddam’s disposal.

When Iranian pilgrims were prohibited from Hajj [an annual Muslim pilgrimage to Mecca], the late Imam Khomeini got worried and said, “It’s not good for our Islamic government to be denied Hajj which is an unshakable principle of Islam and the holy Koran”. He ordered me to get the issue settled.

Our major disagreement with Saudi Arabia was over oil prices. King Abdullah argued, “If we raise oil prices, they [customers] will find alternative fuels and oil will lose its value.”

I proved to him that an alternative fuel couldn’t come around easily and oil value wouldn’t fall any time soon. He accepted my reasoning and cooperated, therefore the issue of oil was sorted out. The late Imam Khomeini had ordered this.

I kept at it [and made efforts to further improve ties]. When I became president, I kept trying and some progress was made.

I met with Abdullah, who was back then the Saudi Crown Prince, twice in Senegal and Pakistan. We discussed things and his attitude changed. In fact he learned about certain facts about which he had quite contrary views.

At the Islamic summit in Pakistan, Abdullah was supposed to come to my room for a word. Earlier in Senegal I had gone to his room and it was agreed that in Pakistan he would come over to my room.

I was sitting at the conference hall when all of a sudden I was told that Abdullah was waiting for me. [My foreign minister] Mr. Velayati said, “We agreed that he would come this time”. He wondered what we should do. In response, I said, “We shouldn’t display arrogance; after all, we seek to talk.”

We were walking toward his room when we saw Abdullah and his entourage come out of the room to welcome us, saying, “We are about to go to your room.”

His attitude seemed to have changed drastically. The modesty that I showed impressed him and encouraged him to come over to my room. Several points of disagreement were resolved during our talks there.

For instance, they were opposed to holding the next summit in Tehran; that issue was settled. They had released a statement in Riyadh, but after our talks, Abdullah called Saud al-Faisal and ordered the statement withdrawn.

After the meeting, we were invited to lunch by the Pakistani prime minister, so we came out, waiting for our cars to pick us up. My car turned up sooner and Abdullah got into my car without any bodyguard. Journalists and others were surprised. We entered the summit together and that spoke volumes.

Later, our friendship found its way into our families. When I traveled there, our families got together; actually our relations went a little beyond diplomatic ties and turned into family relationships.

Abdullah, who travelled to Tehran to attend a summit, let go of diplomatic protocols and insisted on coming to my house.

Anyway, lots of problems were addressed in that atmosphere. We worked a lot on improvement of ties. Now if we both try to improve the conditions, we can go back to the point we were. Back then King Salman was the governor of Riyadh. He threw a party for us and treated us with humility. Everything was brotherly. He described things for me in a friendly fashion.

But now there are things over which we have disagreement like Yemen, Bahrain, Syria, Iraq, Lebanon, and even the Zionist regime. We do not approve of the current level of their relations with Israel. Such disagreements exist and need to be addressed. In my opinion, we can return to where we were.