Instrumental use of terrorism leads to its escalation: Larijani 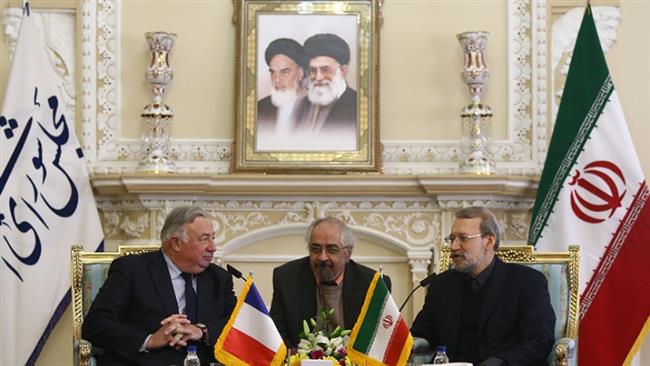 Ali Larijani said crises in many regional countries can be resolved only through the formation of national unity governments.

Iran’s Parliament Speaker Ali Larijani says the instrumental use of terrorism and the lack of a genuine anti-terror fight have led to the spread of the menace.

“The use of terrorism as a tool is a factor that has helped its spread because certain countries seek to control and not combat and eradicate terrorist groups,” Larijani said in a meeting with President of the French Senate Gerard Larcher in Tehran on Saturday.

He added that crises in many regional countries can be resolved only through the formation of national unity governments, warning that conflicts would otherwise persist in the region.

The Iranian speaker said Western countries need to realize that it is the people who should decide their country’s government through elections.

Larijani further stressed the importance of increasing parliamentary and economic cooperation between Tehran and Paris in a bid to reach common solutions on the establishment of security in the region.

The French senate president said his country, which has been recently targeted by terrorist attacks, is determined to contribute to the resolution of crises.

At least 130 people were killed and 352 others injured when assailants struck at least six different venues in and around the French capital on November 13.

In a statement the day after, the Daesh Takfiri terrorist group claimed responsibility for the attacks.

Larcher pointed to the adoption of a resolution by the United Nations Security Council on putting an end to the nearly five-year-long crisis in Syria and urged a serious international fight against Daesh terrorist group as well as the establishment of democracy in the Arab country.

The Security Council’s resolution, adopted on Friday, calls for Syrian peace talks on a transitional government to begin in early January. It also calls for a nationwide ceasefire in the war-torn country.

According to the resolution, a “credible, inclusive and non-sectarian” government should be established in Syria within six months and UN-supervised “free and fair elections” should be held within 18 months.

Larcher arrived in Tehran at the head of a delegation on Saturday. He is set to hold talks with Iran’s President Hassan Rouhani on Sunday.