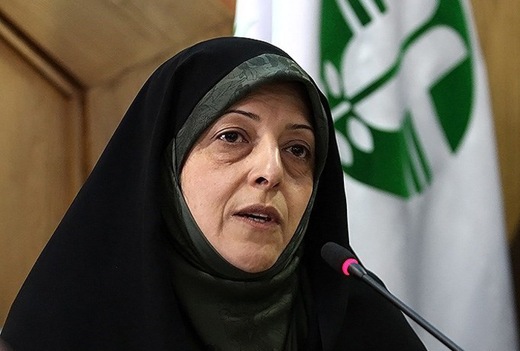 The environment chief has said that the performance of the government should be analyzed, but that critical comments should be fair, and not one-sided.

Rarely a week passes without Iran’s environment chief and her organization not coming under fire by Islamic Republic of Iran Broadcasting (IRIB) and hardline media. These media outlets either criticize her performance or accuse her of pursuing a political agenda instead of focusing on professional management of the environment.

Vaghaye-e Etefaghiyeh in its fourth issue on November 28 published an interview with Masoumeh Ebtekar who has taken the helm of the Environment Protection Organization for the second time in Iran. The following is the translation of the interview in its entirety.

Q: Since the day you were appointed director of the Environment Protection Organization, IRIB and some media outlets which are critical of the government have shown opposition to you and created ballyhoo [about your performance]. Why?

A: I have never been involved in political ballyhoo; rather such ballyhoo has been created for me. My colleagues and I at the Environment Protection Organization (EPO) have, by no means, pursued a political agenda. Unfortunately certain media have a political attitude toward EPO.

From day one, I tried to distance my organization from political and factional issues, but some political currents seem to be displeased with the EPO advancing its own agenda. The fact of the matter is that since the beginning, the eleventh government has received an unkind treatment by certain media circles, and it is not only me who is treated this way.

IRIB – in some of its news bulletins – has treated the EPO unfairly. I think IRIB is dealing with the question of environment and me in a one-sided manner. IRIB does not cover all my plans and activities; it only airs marginal issues about the EPO which is a sort of chantage.

Q: Why do you think some media organizations are seeking to create ballyhoo for you?

A: By and large, I think some media do not critique the government fairly. They are after ballyhoo more than critique. I expect to see the eleventh government be compared with its predecessors. We expect to see that the whole government is treated properly and critiqued fairly. How come they [IRIB and other media] kept silent over the same problems and mismanagement under the previous government?

A just critique is expected to review both the current situation and the past. In 2002, we purchased the most advanced radio masts and towers for the Environment Protection Organization. Did anybody ask why these towers have disappeared? These radio towers have been sold under the previous government. Why doesn’t nobody ask what has become of these towers?

Is there anybody to ask about the reason behind land grab or reclamation in Varjin Protected Area [in Tehran Province] and Abr [Cloud] Forests [in Shahrood]? In Varjin, villas have been built, sold through deed. This is just one, out of hundreds, of the cases of land grab which has been done in the name of serving people.

The head of [the EPO’s] Tehran Department under the previous government kept hundreds of property deeds in his house in the name of development. Withdrawing from public coffers, they [the previous government officials] did a treacherous act of betrayal as far as the Abr Forests were concerned. What I want to say is that if you try to critique [the situation on the ground], try to have a look at what has happened over the past years too.

In 2006, a road was built in the middle of Muteh, which is an environmental place [northwest of Isfahan Province]. How come IRIB has not broadcast a report on what has happened in Muteh since 2005? There are multiple issues for IRIB to be concerned about. The previous government tried to dissolve the Environment Protection Organization to prevent it from dealing with that terrible crime [road building in Abr Forests].

Q: In spite of what you said, they are critical of the current state of the environment.

A: We expect them to review all periods. The MPs who have constantly pursued investigations into the [performance of the] EPO over the past two years, called me to parliament many times. We are still facing cases of land grab, corruption and so forth.

When a road was being built through the Abr Forests – a grave and unforgivable act of betrayal of the Iranian nation – they put forward a plan to dissolve the EPO. During the eight years the previous government was in power, the number of environment organizations halved.

Q: You didn’t explain the main reason behind their strong opposition to you. You have repeatedly said what you just said.

A: First we raised question about the distribution of carcinogenic gasoline which was another act of betrayal. Supporters of [former president] Ahmadinejad hold grudges against me. Mr. Mirkazemi summoned me to parliament several times. The gasoline was carcinogenic thanks to the existence of abundant volumes of benzene which was 1,000 times the international standard.

We shouted this. Half of the gasoline used in Tehran had benzene. We tasked Tehran Air Quality Control Company (AQCC) with measuring the volume of benzene in the gasoline. The findings of those tests – whose documents are now available – showed that the gasoline which was distributed in Tehran and other cities over the past two years was highly carcinogenic.

Right then a barrage of charges and criticism was unleashed against me and my family. The day I wanted to discuss these questions, I was told not to do that. They threatened me and then they began to attack me on different grounds.

Q: Once you said that you are faced with family problems?

A: They said that my husband imported gasoline! Does it mean that my husband is not allowed to live his own life, because I have got involved in the areas that I should not have been? I appeared before parliament seven times to offer explanations about cancerous gasoline.

After the carcinogenicity of the gasoline was established, Mr. Mirkazemi, an MP in the ninth parliament, told me that I had stood up to the achievements and glories of a great government. That’s right! I take pride in the fact that I have objected to the [use of] gasoline which was cancerous, killing people.

We receive threats for any question we try to deal with. For instance, “Euro 4” gasoline is distributed in some cities at a time when sanctions [against Iran] are still in place. In the early days of the eleventh government, I called on Oil Minister Mr. Zanganeh to oppose [the use of] the deadly gasoline. And now over the years these gentlemen [a reference to Ahmadinejad’s supporters] accuse me of treason. I want to ask who the [real] traitor is.

I expect to see the environment treated fairly and critiqued expertly. As I already said, certain media outlets have adopted a political attitude toward the EPO, and what is being done against me is politically motivated.

The state of Iran’s environment was complicated thanks to the inattention to and the abandoned management of the natural life by the previous government. But I hope that we have not missed out on the opportunities, and that negligence has not delivered a serious blow to the country’s environment.