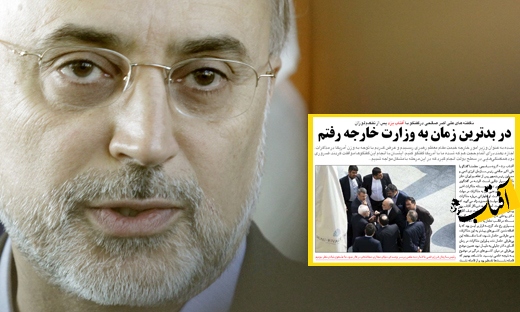 Ali Akbar Salehi, a former Iranian top diplomat, reveals what happened behind the scenes before Iran and the United States opened face-to-face talks.

The head of the Atomic Energy Organization of Iran, who once served as foreign minister in the Ahmadinejad administration, has disclosed untold stories about how the Islamic Republic of Iran and the United States started to meet face-to-face.

Aftab-e Yazd daily on April 11 published an interview with Ali Akbar Salehi on his role as foreign minister in the previous government and what came before Tehran and Washington decided to sit down across a table from each other to have direct talks.

The following is a partial translation of the former top diplomat’s side of the story:

“It was before the reelection of Mr. Obama that I took over as foreign minister. We came to the conclusion that talks with the group [P5+1] would lead nowhere because they were not ready to have interaction and cooperation with Iran despite the efforts the [Iranian] negotiating team had been putting in.

“It was too tough to simultaneously hold talks with six countries. More importantly, those countries involved in the talks did not have equal position [in negotiations]; in other words, the United States held more sway than other countries over the talking point.

“In the capacity of foreign minister, I went to meet with the Supreme Leader, asking him if we can test another alternative [direct talks with Washington]. Back then, the Americans had let Iran in on their request through Oman. Due to the big influence the US wielded in the talks, I asked the Leader to let us try the second option.

“Given the US record, the Leader said that the US would recant on its promises. I asked him to let us enter talks [with the US] to exhaust all options. If the talks produced no result, I said, everybody would realize that it was the other party which dug in its heels.

“The Leader showed magnanimity and agreed to the option of holding talks, with some strings attached. After the Leader’s confirmation, it was necessary to do some preparations in the government, and it was where some problems popped up.

“This is the very point which reveals the difference between the tenth and eleventh governments. Thanks to the Supreme Leader’s endorsement, we were supposed to take care of the process in the shortest time possible. At that time, the conditions were perfect. We could have gone ahead [with the talks] if today’s harmony and unanimity had existed then, but unfortunately we faced lack of coordination.”

Salehi declined to go into detail and said, “The job was proceeding slowly. The Americans insisted that the talks be held before the US election. Although we were in unofficial, written contact with them through Oman, the face time came too late. Finally we held the first session in which the then Deputy Foreign Minister Mr. [Ali Asghar] Khaji led the Iranian team – including several foreign ministry directors – at the talks, and the parties to the talks reached preliminary agreements on certain principles.

“The second session, however, was postponed due to the very lack of coordination. The pace was slow despite our painstaking efforts and finally the second session was held. The proper documentation is available. Correspondence for and bad-tempered reactions to the ongoing process are all documented and history will pass judgment on them.

“The second session resulted in a letter by the Omani sultan to Mr. Ahmadinejad [the then Iranian president], saying that representatives of Iran and the United States had come to him, with the Americans admitting that they recognized Iran’s enrichment [right].

“This marked the first step taken in the talks [between Iran and the US]. Then the framework was set on how to continue the negotiations. A third session was being planned [for the two sides] with Iran’s presidential elections looming.

“I want to say that the talks have taken so much time because a great deal of energy and time has been spent for each round.”