Chairman of Expediency Council Ayatollah Akbar Hashemi Rafsanjani said on Tuesday that honesty is the main criterion for success of nuclear talks between Iran and G5+1.

Iran’s alleged access to nuclear arms is nothing more than a pretext for global powers to obstruct nuclear talks, he said.

Rafsanjani made the remarks in a meeting with Slovak Deputy Premier and Foreign Minister Miroslav Lajcak in Tehran. 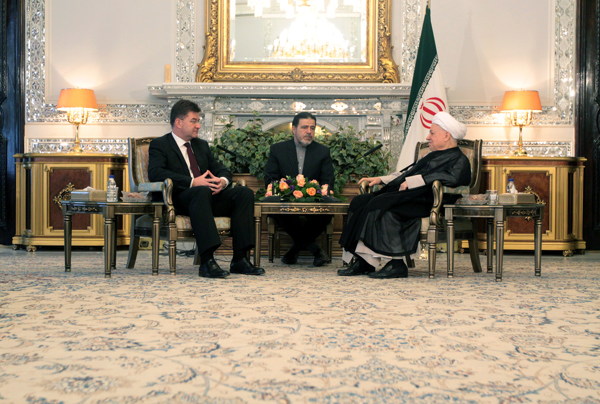 On talks between Iran and G5+1, he said in the new series of talks Iran has become suspicious of the other party’s good intention because it believes that the dispute should be resolved through negotiations and toughening economic sanctions at this juncture has no justification.

Iran has proved both in deeds and words that it is seeking peaceful use of indigenized nuclear technology and during the eight-year sacred defense the country practically indicated that it is opposed to proliferation of weapons of mass destruction, Rafsanjani said.

He said that other parties to the nuclear talks have failed to keep their promises on lifting economic sanctions while expecting Iran to yield to their demands.

Iran has repeatedly declared that proliferation of nuclear weapons is forbidden based on Islamic and humanitarian principles but the country reserves the right to protect its nuclear rights and will not give up even one iota of its rights.

Regarding regional and global developments, Rafsanjani said it will be logical for Europe to revise its policies in dealing with Iran considering the country’s geo-political situation, its rich natural resources and its might to fight terrorists.

The big powers’ immature measures to invade some regional countries and their financial and military support for terrorist groups should be blamed for spread of terrorism, he said.

The West and the US in particular supported the Taliban in Afghanistan and ISIL in Syria, he said, adding that they have categorized terrorists into good and bad groups and try to deal with them based on their interests and policies.
The Zionist regime is the symbol of state terrorism in the world, Rafsanjani said, adding that when they back the Zionists’ crimes and atrocities against the people in Gaza, no doubt that world public opinion would cast doubt on their claims and this will make situation more complicated.

Presence of Iranian dissident groups in the parliaments or various centers of Western states is a good sign of these countries’ double standard policies as well as the confusion of big powers, he said.

Iran is the victim of terrorism and therefore it is ready to take part in any campaign against this evil phenomenon, Rafsanjani said, adding that Iran expects the global powers to harmonize their deeds and words in dealing with such issues.

The Slovak foreign minister, for his part, briefed Rafsanjani on the current economic status of the European Union and said his country has been affected by EU economic problems.

Slovakia is ready to broaden economic, political, cultural and social relations with Iran, he said.

“Peaceful use of nuclear energy is among legitimate rights of all nations and we are happy to witness that Iran has chosen the path of negotiations to resolve the country’s nuclear issue,” he said.

Expressing concern about the issue of terrorism, he said to deal with this menace it is necessary to form an international coalition and since Iran has invaluable experiences and necessary facilities in this regard, the presence of the country in such a coalition can be very effective.

The best way to resolve Iran’s nuclear issue is to prevent it from being politicized and instead focus on technical issues, he said.