Highlights of Ettela’at newspaper on September 7 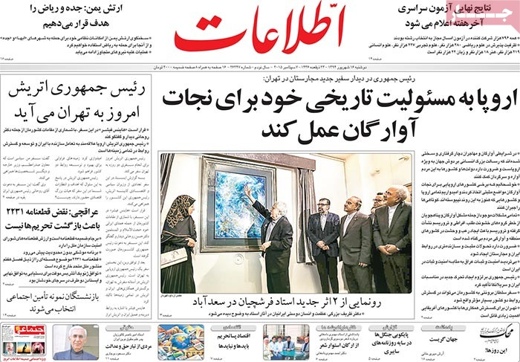 A special look at the headlines Ettela’at newspaper covered on September 7.

♦ President Rouhani has urged Europe to live up to its historic duty to help refugees.

At the ceremony, Foreign Minister Zarif said that the magnanimity and philanthropic nature of Iranian people are quite evident in the works of Master Farshchian.

♦ The results of the nationwide university entrance exam will be made public this week.

♦ The Yemeni army has threatened to target Jeddah and Riyadh.

A spokesman for the Yemeni Army said operations against the aggressors will continue.

♦ The Austrian president arrives in Tehran on Monday.

During the state visit, the Austrian head of state is to hold talks with a number of senior Iranian officials, including President Rouhani.

♦ “Violation of Security Council Resolution 2231 would not result in sanctions snapping back into place,” said Iranian nuclear negotiator Abbas Araghchi.

He further said Iran’s missile program will go ahead unhindered.

♦ The top retirees of the Social Security Organization will be named.