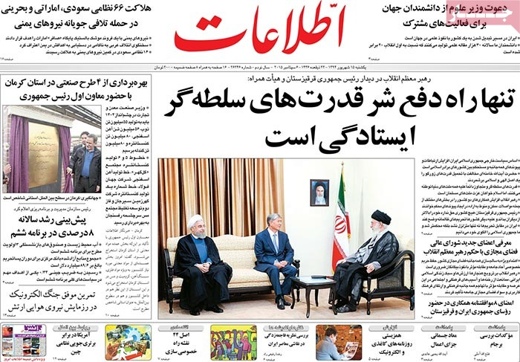 A special look at the headlines Ettela’at newspaper covered on September 6.

♦ “The only way to dispel the evil of hegemonic powers goes through resistance,” the Supreme Leader said at a meeting with the visiting Kyrgyz president.

♦ The Iranian science minister has invited scientists from all over the world to launch joint projects with the Islamic Republic.

The science chief has further said Iranian scientists release more than 30,000 scientific papers a year, a 20-fold increase over the late 70s when the Revolution triumphed.

♦ The Supreme Leader has named the new members of the Supreme Cyberspace Council.

In a decree for the new members of the council, Ayatollah Khamenei has urged the council to make special efforts to clean up the country’s cyberspace, respect the privacy of members of the public, and make an effective stand against enemy inroads.

♦ Iran and Kyrgyzstan have signed eight cooperation agreements with the presidents of the two countries in attendance.

♦ Four industrial projects came on stream in Kerman at a ceremony attended by the first vice-president.

♦ The director of the Management and Planning Organization has said that the country’s Sixth Development Plan envisions eight percent annual growth.