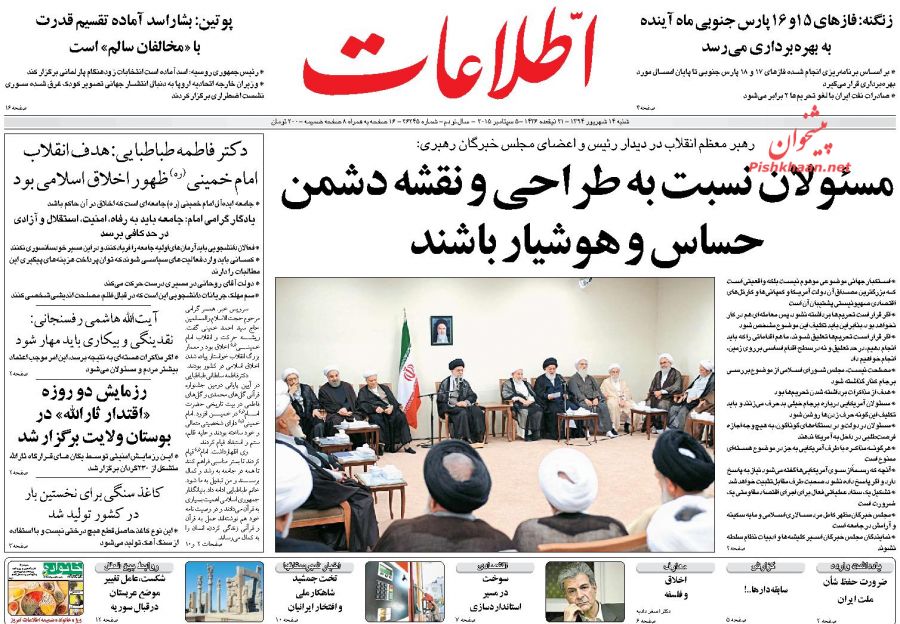 A special look at the headlines Ettela’at newspaper covered on September 5.

♦ The Supreme Leader has urged officials to be sensitive and vigilant in the face of enemy plots.

♦ Oil Minister Bijan Namdar Zanganeh has said that Phases 15 and 16 of South Pars gas field will come on stream next month.

He further said that termination of sanctions will see the volume of Iran’s oil exports double.

♦ The Russian president has said that Bashar Assad is ready for power-sharing with the “healthy opposition”.

♦ The chairman of the Expediency Council has said that liquidity and unemployment should be brought under control.

Ayatollah Hashemi Rafsanjani further said that conclusiveness of the nuclear talks is bound to bolster trust between officials and members of the public.

Meanwhile the grandson of the founding father of the Islamic Republic said society needs to have enough welfare, security, independence and freedom.

♦ A two-day drill involving more than 50,000 volunteer Basijis has been held at Tehran’s Velayat Park.

♦ Rockstock, a kind of paper which is made of rock, has been produced in the country for the first time.

To make this an extremely environmentally friendly paper, not a single tree is felled.