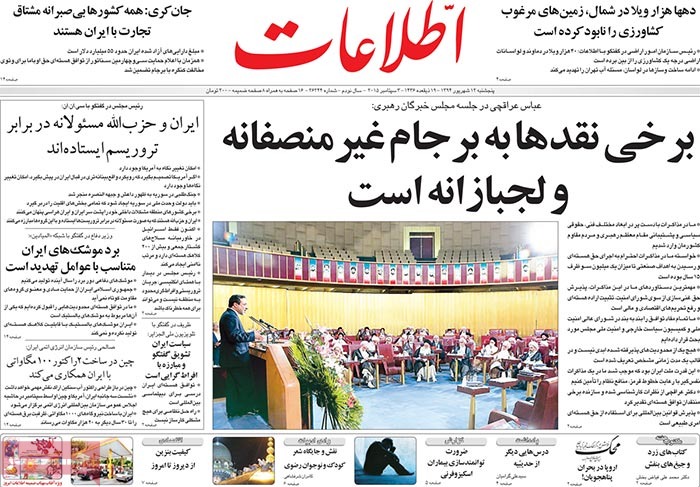 A special look at the headlines Ettela’at newspaper covered on September 3.

Ettela’at: Construction of tens of thousands of villas in the north has taken a toll on agricultural land.

The director of the Land Affairs Organization said continued development in Lavasan poses a threat to Tehran’s water supply.

Ettela’at: The US secretary of state has said that all countries are anxiously waiting for business with Iran.

Ettela’at: “Iran and Hezbollah have responsibly stood up against terrorism,” the Iranian parliament speaker said in an interview with CNN.

Ali Larijani further said that a change of attitude toward the US is possible.

Ettela’at: “The range of Iranian missiles is proportionate to threats,” said the defense minister in an interview with Al Mayadeen.

Ettela’at: “Iran’s policy centers on encouragement of dialogue and the fight against extremism,” said Foreign Minister Zarif in an interview with Algerian national TV.

The top diplomat further said the Iranian nuclear deal is a lesson for international diplomacy.