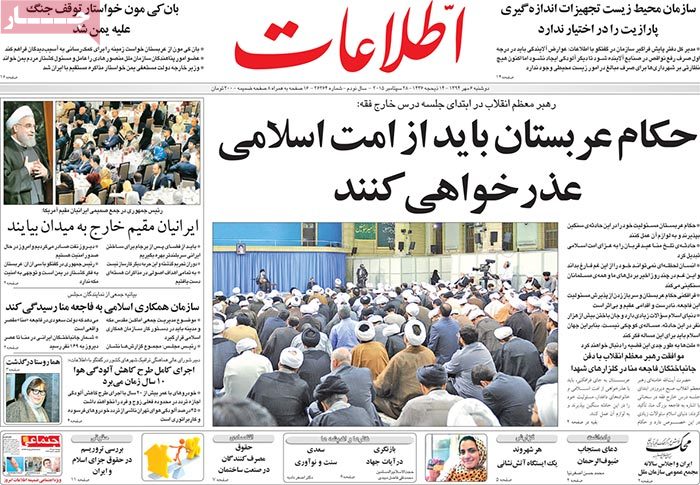 A special look at the headlines Ettela’at newspaper covered on September 28.

♦ The Supreme Leader has said that Saudi leaders must apologize to the Islamic community.

♦ The Environment Protection Organization does not have the instruments needed to gauge satellite jamming signals.

♦ UN Secretary-General Ban Ki-moon has called for an end to the war in Yemen.

The UN chief also urged Saudi Arabia to set the stage for provision of aid to the victims of the war.

In another development, the resigned foreign minister of Yemen called for direct talks with Iran.

♦ In a meeting with Iranian expatriates in New York, President Rouhani urged the Iranian community residing overseas to step in and take advantage of the atmosphere that has emerged in the wake of the Iran nuclear deal to build a more glorious Iran.

♦ In a statement, a number of MPs have called on the Organization of the Islamic Cooperation to investigate the Mina tragedy.

The number of Iranian pilgrims killed in the stampede stood at 169 as of Sunday.

♦ Full implementation of the plan to reduce air pollution will take 10 years.

An official with the Urban Traffic Coordination Council has said that old carburetor cars account for 45 percent of air pollution in Tehran.