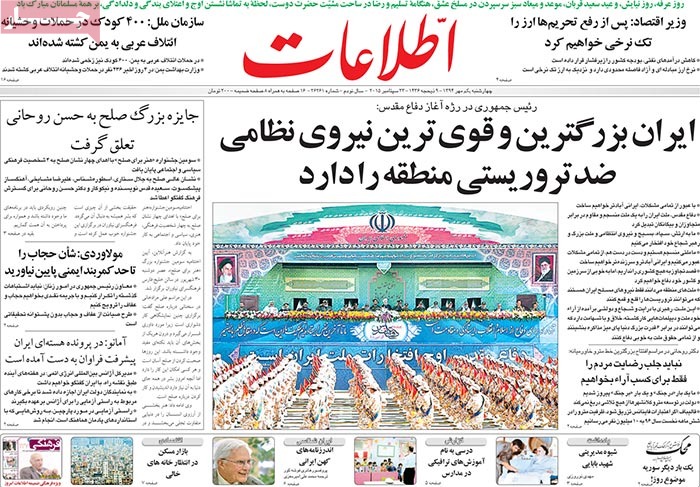 A special look at the headlines Ettela’at newspaper covered on September 23.

♦ “Iran has the largest and most powerful anti-terror armed forces in the region,” said President Rouhani in a military parade which marked the start of Sacred Defense Week.

♦ The economy minister has said that single foreign exchange rate will be introduced in the country after the termination of sanctions.

♦ The United Nations has said that as many as 400 children have been killed in brutal attacks by the Saudi-led coalition in Yemen.

At least 600 children have been injured in the attacks, the world body further said.

♦ Hassan Rouhani has been awarded the Grand Peace Prize.

A third Art for Peace Festival came to an end, offering its [prestigious] peace honors to four cultural, political and social figures.

♦ Vice-President for Women and Family Affairs Shahindokht Molaverdi has said that the dignity of Hijab [Islamic covering] should not be downgraded to seat belts. [She was referring to a decision by the traffic police to fine Iranian women for their failure to observe Hijab are at the wheel.

She also said that we should not repeat past mistakes and resort to fines to promote Hijab and dignity.

♦ IAEA Chief Yukiya Amano has said that remarkable progress has been made in Iran’s nuclear case.

The director general of the International Atomic Energy Agency added that his agency will hold talks with Iran in coming weeks in line with the roadmap [the two sides signed back in July].

♦ “We should not seek to win people’s satisfaction simply to garner their votes,” said President Rouhani at the inauguration of the Middle East’s longest subway line.

He further said that the government will do what it takes when it comes to development of the subway system in metropolises.