Highlights of Ettela’at newspaper on September 22 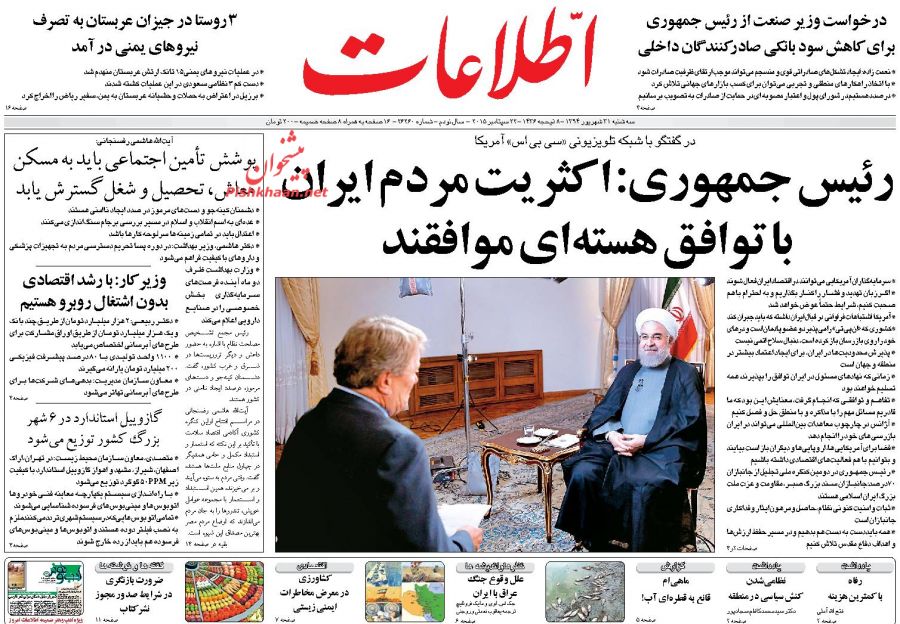 A special look at the headlines Ettela’at newspaper covered on September 22.

♦ “The majority of the Iranian people approve of the Iran nuclear deal,” said President Rouhani in an interview with CBS News.

♦ The minister of mines, industries and trade has asked the president for a cut in interest rates Iranian exporters should pay [for the loans they take out].

In their operation, the Yemeni forces also destroyed as many as 15 Saudi tanks.

Three Saudi troops were killed in the operation.

The Expediency Council chairman also said that the revengeful enemies and mysterious hands are trying to foment insecurity [in the country].

He further said that we need to make a role model of moderation in all affairs.

♦ “We are having economic growth, but no job creation,” said the minister of cooperatives, labor and social welfare.

♦ Standard diesel will be distributed in six big cities in the country.

A deputy director of the Environment Protection Organization has said that diesel 50 ppm (parts per million) will be distributed in Tehran, Arak, Isfahan, Shiraz, Mashhad and Ahvaz