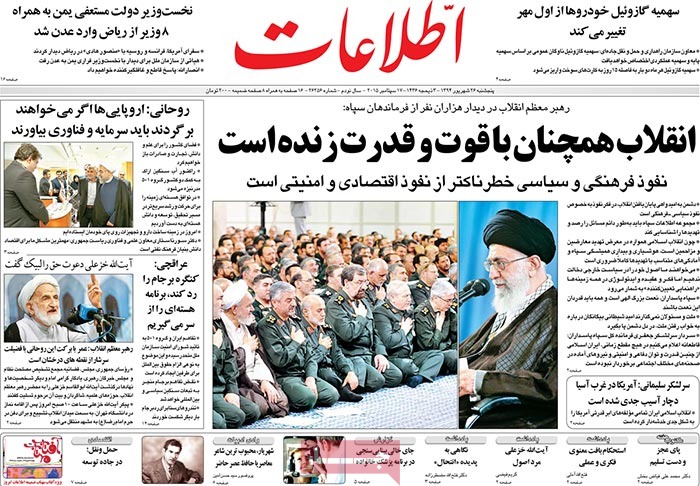 A special look at the headlines Ettela’at newspaper covered on September 17.

He further said that Iran’s Islamic Revolution has seriously challenged the status of the US as a superpower.

♦ There will be changes in diesel quotas of vehicles as of September 23.

♦ The resigned prime minister of Yemen along with eight of his Cabinet ministers has arrived in Aden from Riyadh.

The US, French and Russian ambassadors have met with ousted Yemeni President Mansour Hadi in Riyadh.

♦ “The Europeans need to bring over capital and technology if they wish to have a share of Iran’s market,” said President Rouhani.

♦ Ayatollah Abolghasem Khazali, a member of the Assembly of Experts, has passed away.

The Supreme Leader has said the blessed life of this great clergyman was dotted with shining moments.

♦ Iranian nuclear negotiator Abbas Araghchi has said that if the US Congress rejects the Joint Comprehensive Plan of Action, Iran will resume its nuclear program.