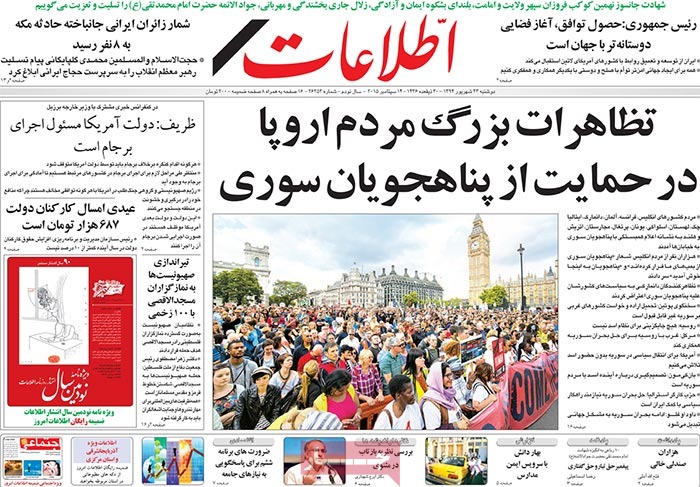 A special look at the headlines Ettela’at newspaper covered on September 14.

♦ Europeans have staged massive rallies in support of Syrian migrants.

♦ President Rouhani has said the conclusion of the nuclear deal ushers in a friendlier atmosphere in relations between Iran and the rest of the world.

At a meeting with the Brazilian foreign minister, the president said Iran welcomes closer ties with Latin American countries.

♦ The number of Iranian pilgrims who lost their lives in the crane crash in Mecca has reached eight.

The chief of staff of the Supreme Leader has sent a message of condolences on behalf of Ayatollah Khamenei to the caretaker of Iranian pilgrims.

♦ “The onus of implementing the Joint Comprehensive Plan of Action falls on the US administration,” Foreign Minister Mohammad Javad Zarif said at a joint news conference with his Brazilian counterpart.

He further said that the Obama administration should stop Congress from taking any measure in contravention to JCPOA.

♦ Civil servants will receive some $230 in yearend bonuses.

The director of the Management and Planning Organization said that the pay rise of civil servants next year [starts March 21, 2016] won’t be any less than 10 percent.

♦ A shooting by Israeli soldiers at Al-Aqsa Mosque has left 100 worshippers injured.

The chairwoman of the Society for the Defense of the Palestinian Nation has said that the Zionist attack on Al-Aqsa Mosque breaks Muslim red lines.