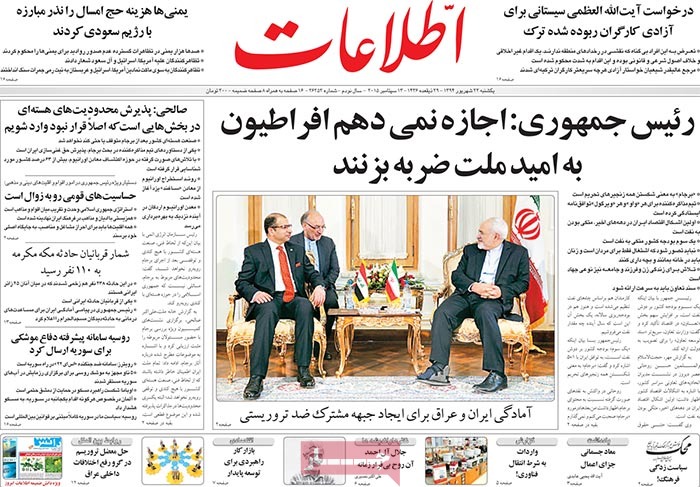 A special look at the headlines Ettela’at newspaper covered on September 13.

♦ “I won’t allow hardliners to deal a blow to the aspirations of the nation,” President Rouhani said.

♦ Iran and Iraq have signaled readiness to form a united anti-terror front.

♦ Grand Ayatollah Ali Sistani has appealed for the release of kidnapped Turkish workers.

The top Shiite cleric said assaulting innocent individuals who play no role in regional developments is unethical, un-Islamic and condemnable.

♦ The Yemenis are using the money they were to spend on the Hajj pilgrimage this year to contribute to the war with the Saudis.

Hundreds of thousands of Yemeni people have staged a rally to protest against Saudi failure to issue visas for Yemeni pilgrims.

♦ The director of the Atomic Energy Organization of Iran has said the nuclear restrictions Iran has accepted cover the areas it was not supposed to wade into in the first place.

Ali Akbar Salehi further said that implementation of the Joint Comprehensive Plan of Action won’t halt or slow down the country’s nuclear industry.

♦ “Ethnic sensitivities are on the decline,” said an advisor to the president for ethnic and religious minorities.

“The policy of the Islamic Republic of Iran centers on unity and proximity among all ethnicities and followers of different faiths,” Ali Younesi said.

♦ The death toll from a construction crane collapse in Mecca has risen to 110.

The Iranian president in a message has expressed Iran’s readiness to offer medical aid to those injured in the deadly accident.

♦ Russia has shipped an advanced missile defense system to Syria.

The Russian government has said that its Syria policy is in line with international law.