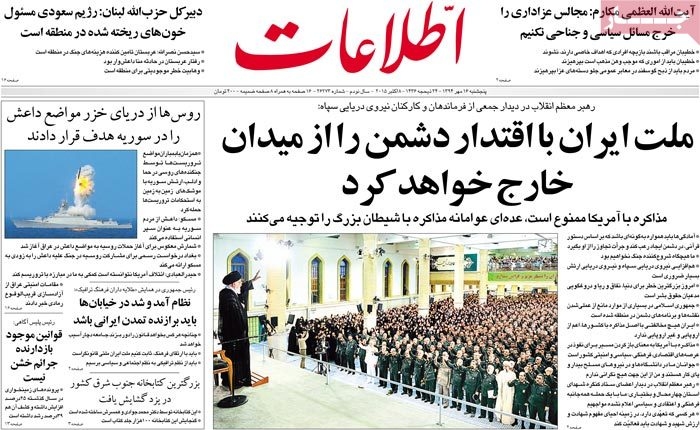 A special look at the headlines Ettela’at newspaper covered on October 8.

♦ “The Iranian nation will drive the enemy from the field with a vengeance,” said the Supreme Leader at a meeting with IRGC Navy commanders and staff.

♦ Ayatollah Nasser Makarem Shirazi [a source of emulation] has said that elegy services should not be dedicated to political and factional questions.

♦ The secretary general of the Lebanese Hezbollah has said that Saudi Arabia is to blame for the blood spilled in the region.

Seyyed Hassan Nasrallah further said that Riyadh is financing the wars raging in the region.

♦ Russian warships targeted IS terrorist positions in Syria from the Caspian Sea.

As Russian warplanes bombed terrorist positions in Hama and Idlib, the Syrian Army rained down surface-to-surface missiles on terrorists.

♦ The president has said that the traffic system of the country should be refined to befit the Iranian civilization.

♦ The biggest library in eastern Iran has been inaugurated in Yazd.

♦ “The existing rules are not sufficient to prevent violent crimes,” said the head of the Criminal Investigation Department of the Iranian police.