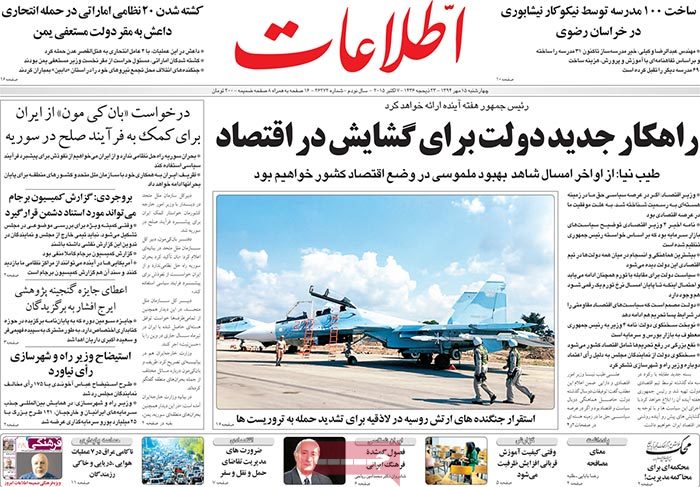 A special look at the headlines Ettela’at newspaper covered on October 7.

♦ President Rouhani will announce a new plan of his government to turn around the economy next week.

♦ Russian fighters have been positioned in Lattakia, Syria to step up attacks on terrorists.

♦ A benefactor from Neishabour builds 100 schools in Khorasan Razavi Province.

Abdolreza Vakili has already built 31 schools and has signed an MOU with the Education Ministry to build another 69.

♦ Twenty Emirati military personnel have been killed in an IS attack on the headquarters of the resigned Yemeni government.

In another development, fighters of the Saudi-led coalition bombed friendly positions in Yemen.

♦ UN Secretary General Ban Ki-moon has called for Iran’s contribution to the peace process in Syria.

The call came at a meeting with Iranian Foreign Minister Mohammad Javad Zarif, who pledged Iran’s continued cooperation with the UN and regional countries to end crises brewing in the region.

♦ The chairman of parliament’s National Security and Foreign Policy Committee has said that the report the JCPOA Review Committee has released can play into the hands of the enemy.

Alaeddin Borujerdi further said that when a special committee is formed in parliament to review an issue, individuals outside the chamber should play no role in drafting its report.

He went on to say that the Americans can build on the content of this report to demand inspections of our military sites in the future.

♦ The minister of roads and urban development has survived a no-confidence vote in parliament.

One-hundred-seventy-five MPs voted to keep Abbas Akhundi at the helm of the Ministry of Roads.

♦ The annual prize of Iraj Afshar Research Center has been awarded to Sepideh Fahimifar and Saeedeh Akbari Darian.