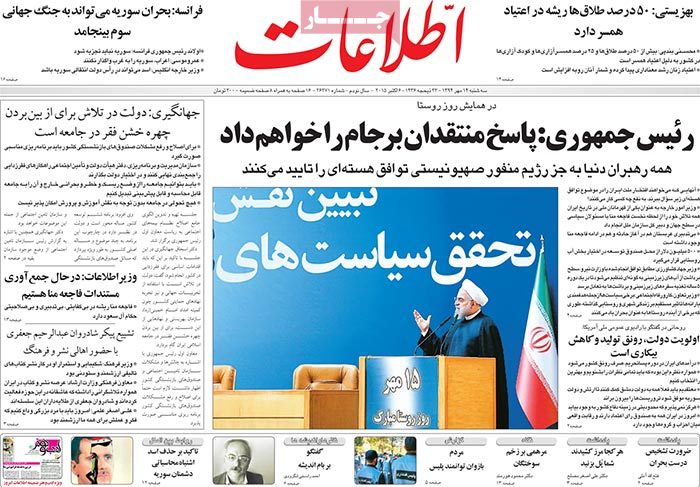 A special look at the headlines Ettela’at newspaper covered on October 6.

♦ President Rouhani has vowed to respond to the critics of the Joint Comprehensive Plan of Action [a nuclear deal Iran and P5+1 struck in July].

♦ President Rouhani has said in an interview with National Public Radio that boosting production and lowering the unemployment rate are the priorities of his government.

He further said that the revenues Iran earns in the post-sanctions era will be spent on efforts to develop the country.

♦ The Welfare Organization has said that as much as 50 percent of all divorces have to do with addiction.

♦ France has said that the Syrian crisis could lead to a third world war.

President Hollande has voiced the opposition of Paris to the disintegration of Syria.

♦ The first vice-president has said that government is scrambling to eliminate the hard face of poverty from society.

Eshagh Jahangiri further said that proper planning is needed to reform and settle the problems of pension funds.

♦ The intelligence minister has said that his ministry is collecting evidence on the Mina tragedy.

♦ A funeral procession has been held for Abdolrahim Jafari, the founder of Amir Kabir Publishing Company.