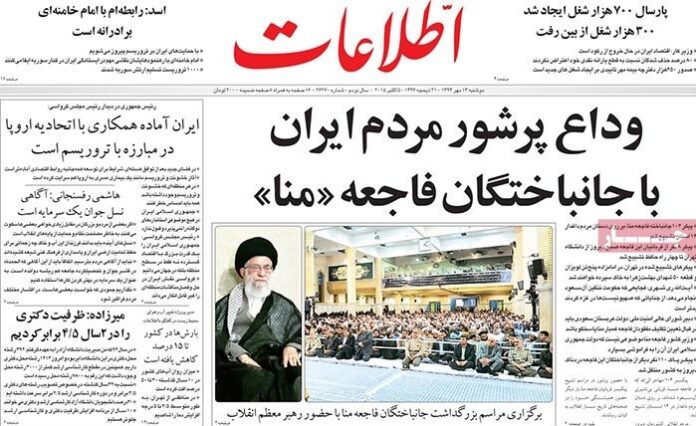 A special look at the headlines Ettela’at newspaper covered on October 5.

♦ Iranians have bid an emotional final farewell to the victims of the Mina tragedy.

♦ The Supreme Leader has attended a service to honor the memory of the Iranians who were killed in the deadly stampede in Mina, Saudi Arabia.

The labor minister has said that Iran’s economy is coming out of recession.

♦ President Assad of Syria has said his relationship with Imam Khamenei is brotherly.

He further said that building on Iran’s support, Syria will defeat terrorism.

♦ President Rouhani has told the visiting Croatian parliament speaker that Iran is ready to cooperate with the European Union in the fight against terrorism.

He further said in the post-nuclear deal era the stage is set for all-out expansion of economic ties.

♦ “Awareness of the younger generation is an asset,” said the chairman of the Expediency Council.

Ayatollah Akbar Hashemi Rafsanjani further said expediency of the establishment and support for the revolution are the reasons why people and the elite are keeping silent in the face of excessive demands by some.

♦ An official with the Environment Protection Organization has said that the country’s precipitation levels are down 15 percent.

In some areas in Tehran Province, temperatures have risen by 4.5º-5º C.

♦ Hamid Mirzadeh, the president of the Islamic Azad University, has said that the number of Ph.D. students the university admits has increased 4.5-fold in two years.