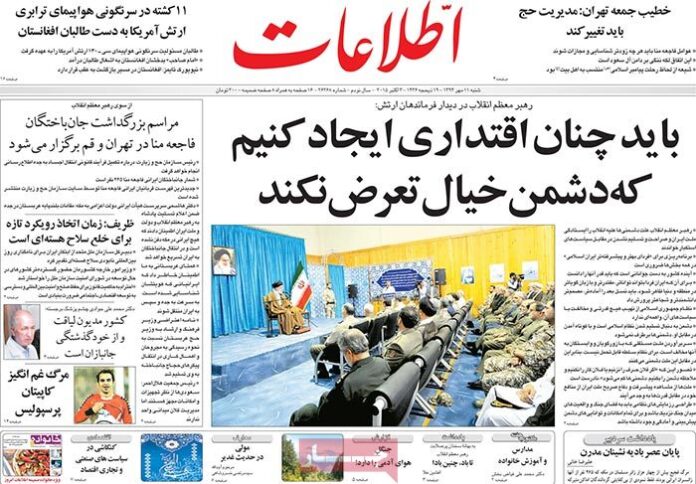 A special look at the headlines Ettela’at newspaper covered on October 3.

♦ “You need to bolster the country’s power so that the enemy cannot even think of attacking Iran,” said the Supreme Leader in a meeting with Army commanders.

♦ Tehran’s Friday payer leader has said that the management of Hajj should be changed.

The Friday prayer leader also said that those responsible for the Mina tragedy should be immediately identified and brought to justice.

♦ The Taliban in Afghanistan have brought down a US Army cargo plane. Eleven people were killed in the crash.

The Taliban have claimed responsibility for the downing of the US C-130 transport plane.

♦ A commemorative ceremony will be held for the victims of the Mina tragedy in Tehran and Qom on orders of the Supreme Leader.

The number of Iranian pilgrims killed in the Mina tragedy has risen to 465.

♦ Foreign Minister Mohammad Javad Zarif has said that time has come for a new approach toward nuclear disarmament.

The UN secretary general has praised Iran’s initiative to designate an International Day for the Total Elimination of Nuclear Weapons.

♦ “The country is indebted to the competence and self-sacrifice of the war disabled,” said Dr. Mohammad-Ali Javadi, a renowned ophthalmologist.

♦ The tragic death of the Persepolis captain