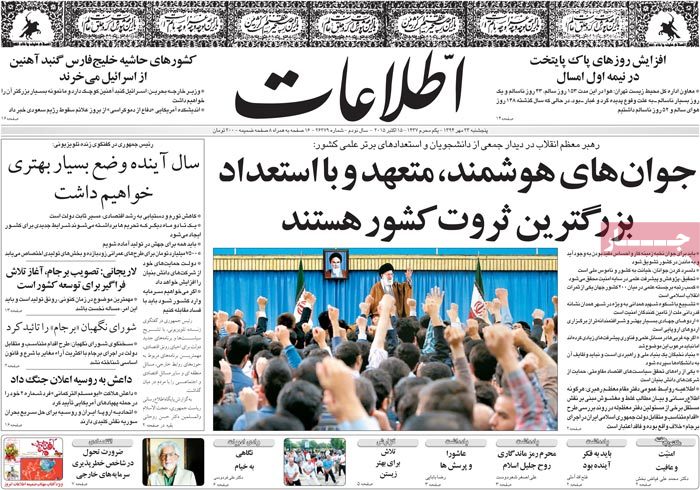 A special look at the headlines Ettela’at newspaper covered on October 15.

♦ “The intelligent, committed and talented youth are the biggest asset of the country,” said the Supreme Leader at a meeting with a host of students and scientific talents of the country.

♦ The number of days the capital had clean air increased in the first half of the year.

♦ Countries on the Persian Gulf are to buy Iron Dome from Israel.

♦ In a televised live interview [Tuesday night] President Rouhani said the country will have much better conditions next year.

He further said measures to cut inflation and secure economic growth are an integral part of the policies of his government.

♦ “Approval of the Joint Comprehensive Plan of Action marks the beginning of comprehensive efforts to develop the country,” Parliament Speaker Ali Larijani said.

The top MP further said that measures to promote production should be given priority.

♦ The Guardian Council has approved the Joint Comprehensive Plan of Action.

A spokesman for the council said a majority of the councilors did not find any constitutional or Sharia-related problems with the Government’s Reciprocal and Proportional Action Bill on the implementation of the Joint Comprehensive Plan of Action.

♦ IS has declared war on Russia.

The terrorist group confirmed its number two man has been killed in airstrikes by American drones.