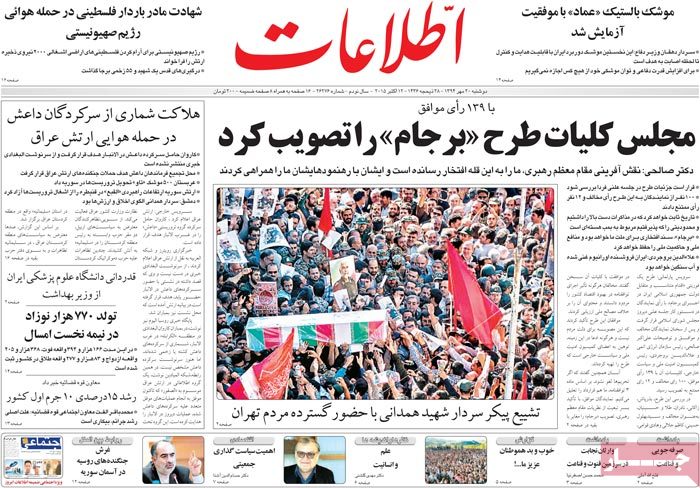 A special look at the headlines Ettela’at newspaper covered on October 12.

♦ Parliament has passed the general outlines of a bill on the implementation of the Joint Comprehensive Plan of Action.

♦ People turned out in force for the funeral of Brigadier General Hossein Hamedani [who was martyred in the suburbs of Aleppo, Syria on Thursday].

The defense minister has hailed Emad as the country’s first high-precision long-range missile.

♦ A pregnant Palestinian woman has died in an Israeli airstrike.

In a bid to crack down on Palestinians in occupied territories, the Zionist regime has called up 2,000 army reservists.

♦ A number of IS leaders have died in an Iraqi military airstrike.

A convoy of IS leaders came under attack in al-Anbar Province; there are no words on the fate of Abu Bakr al-Baghdadi.

♦ Iran University of Medical Sciences has hailed the services of the health minister.

♦The top 10 crimes in the country have grown 15 percent, said the deputy judiciary chief.