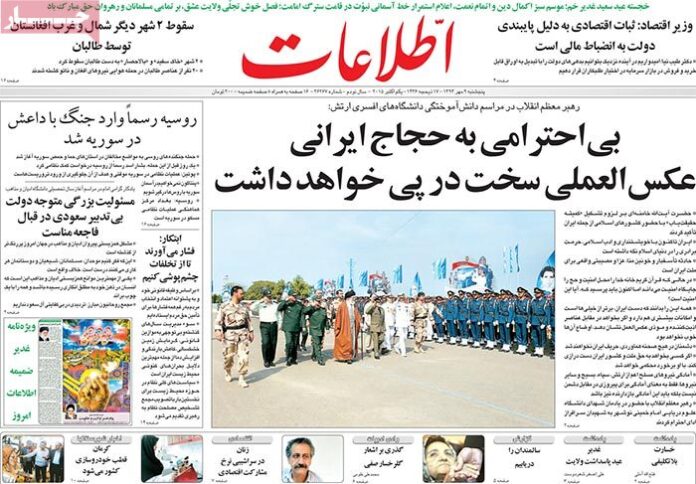 A special look at the headlines Ettela’at newspaper covered on October 1.

♦ “Disrespect for Hajj pilgrims will result in a harsh reaction,” the Supreme Leader said at the commencement of Army cadets.

♦ The economy minister has credited government’s commitment to financial discipline for economic stability of the country.

♦ Two more towns in northern and western Afghanistan have fallen to the Taliban.

In another development, 20 Taliban fighters were killed in air strikes by Afghan and NATO fighters.

♦ Russia has officially entered the war against IS in Syria.

♦ The director of the Environment Protection Organization has said that some are putting pressure on her agency to close its eyes to [environmental] offenses.

Dr. Masoumeh Ebtekar further said that mismanagement of the past years [a reference to Ahmadinejad presidency] and failure to pay attention to rules when it came to climate change, drought, etc. is to blame for the environmental crises the country is now facing.

♦ “The imprudent Saudi government faces a heavy responsibility for the Mina tragedy,” said the grandson of the late Imam Khomeini.

Seyyed Hassan Khomeini, who was speaking at a ceremony to mark the start of the new academic year in the University of Faiths and Religions, further said that the problems plaguing coexistence among followers of different faiths in the world are now bigger than in the past.