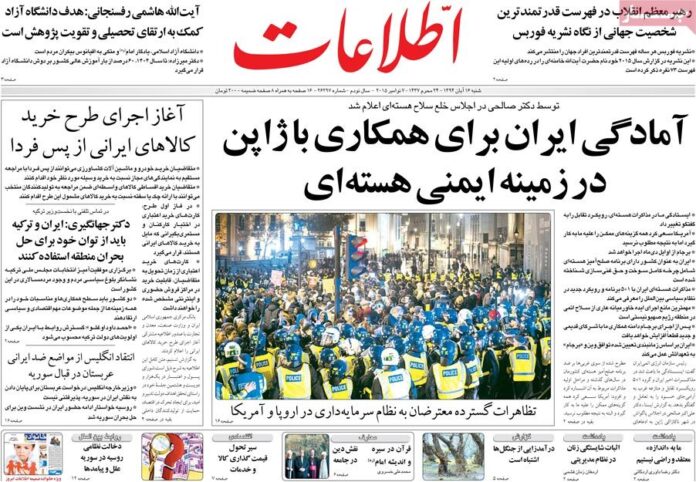 A special look at the headlines Ettela’at newspaper covered on Nov. 7.

♦ Iran voices readiness to cooperate with Japan on nuclear safety.

♦ Iran’s Supreme Leader has a berth on Forbes magazine’s 2015 list of the world’s most powerful people.

Ayatollah Khamenei is among top finishers on the magazine’s list of 74 most powerful people this year.

♦ The plan to buy Iranian-made commodities is to get underway on Monday.

In the first phase of the plan, civil servants and pensioners are provided prepaid cards to purchase Iranian-made goods.

♦ “Iran and Turkey should tap into their capabilities to help solve the regional crisis,” said the first vice-president in a telephone call with the Turkish prime minister.

Ahmet Davutoglu told Eshagh Jahangiri that promotion of ties with Iran is one of his government’s priorities.

♦ Britain lashes out at Saudi Arabia’s anti-Iran stances in dealing with the Syrian question.

The British foreign secretary has said that Saudi Arabia’s call for ending Iran’s role in Syria is far from acceptable.

♦ Massive rallies in the US and Europe in protest at capitalism