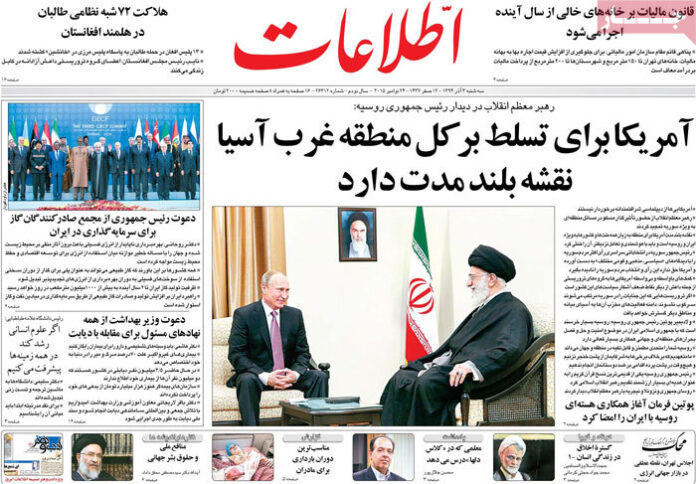 A special look at the headlines Ettela’at newspaper covered on Nov. 24.

♦ The US has long-term plans to dominate West Asia, said the Supreme Leader at a meeting with Russian President Vladimir Putin.

♦ A law that levies tax on houses which remain unoccupied will be implemented as of next year.

♦ Seventy-two Taliban militants have been killed in Helmand, Afghanistan.

It came after 13 Afghan police officers were killed in a militant attack on a border police outpost in Khashin.

♦ The president has called on the Gas-Exporting Countries Forum to invest in Iran.

President Rouhani said excessive use of fossil fuels has left a negative impact on the environment. “The world is now facing a grave problem: Striking a balance between energy consumption to secure economic development and preservation of the environment.”

♦ The health minister has called on all appropriate agencies to contribute to efforts to counter diabetes.

Dr. Hassan Hashemi said 4.5 million Iranians are suffering from diabetes with as many as 2 million of them being unaware of the condition.

♦ With the humanities growing, we’ll be able to make progress on all fronts, said the president of Allameh Tabatabai University.

He further said to be able to critique modernism one needs to know its core principles first.