Highlights of Ettela’at newspaper on Nov. 22 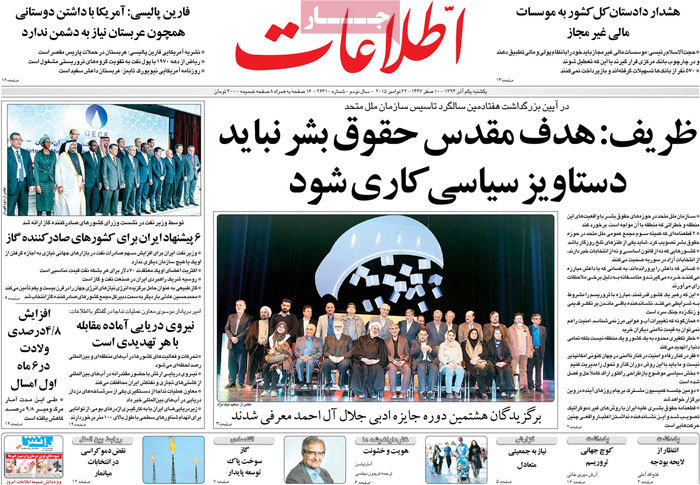 A special look at the headlines Ettela’at newspaper covered on Nov. 22.

♦ The holy objective of human rights should not be used as a tool for political purposes, said the foreign minister at a ceremony in Tehran to mark the 70th anniversary of the United Nations establishment.

♦ The winners of the Jalal Al-e Ahmad Literary Award [presented yearly to the best Iranian authors] were announced.

♦ The prosecutor general has sounded a note of warning to unauthorized financial institutes.

Ebrahim Raeisi has said that the unauthorized financial institutes should adapt themselves to the country’s monetary and financial system and act within the frameworks set by the Central Bank or they will risk shutdown.

The US magazine wrote in an article (November 20): “Since the 1970s, the Saudi government and its allied religious establishment have exported their extremist version of Sunni Islam around the world — all financed by their oil money.”

♦ The Iranian oil minister has put forward six proposals for [adoption by] the gas exporting countries.

Bijan Namdar Zanganeh said in a ministerial meeting of the Gas Exporting Countries Forum (GECF) that Iran’s does not need the permission of OPEC or any other organization to raise its crude exports to global markets.

♦ The second-in-command in the Iranian navy has said that the naval forces are prepared to counter any threat [against the country].

Rear Admiral Seyyed Mahmoud Mousavi told Ettela’at that Iran constantly monitors the activities and movements of other countries in regional and international waters.

♦ Iran posted a 4.8 percent increase in the number of births in the six months to September 23.

The country’s death rate was down by 9.8 percent in the same period.