Highlights of Ettela’at newspaper on Nov. 21 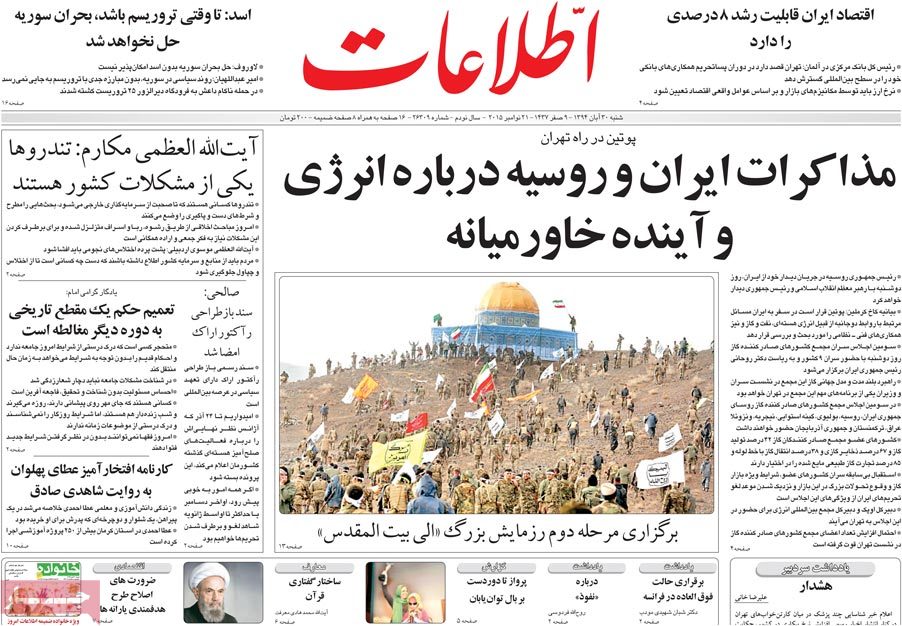 A special look at the headlines Ettela’at newspaper covered on Nov. 21.

♦ Iran and Russia will hold talks on energy and the future of the Middle East.

♦ The Iranian economy does have the potential to register eight percent growth.

The governor of the Central Bank, who was in Germany, said that Iran seeks to expand its banking cooperation with the international community in the post-sanctions era.

♦ The Syrian president has said as long as terrorism exists, the crisis his country is facing remains unresolved.

The Russian foreign minister said in the absence of Assad a solution to the Syrian crisis will remain elusive.

♦ Grand Ayatollah Nasser Makarem Shirazi has said that hardliners are a problem for the country.

As soon as the question of foreign investment is raised, hardliners introduce restrictive regulations, the source of emulation said.

♦ A contract on the reconfiguration of Arak nuclear facility has been signed, said the director of the Atomic Energy Organization.

♦ Extending the issues that hold true in one period in history to another is fallacy, said the grandson of the late Imam Khomeini.

Seyyed Hassan Khomeini further said that in developing an understanding of the problems of society one should not be swayed by sloganeering.

♦ A second phase of “Toward Beit ul-Muqaddas Maneuvers” has been held.

♦ A sincere account of the stellar track record of Ata Ahmadi, a philanthropist who has implemented more than 250 education projects in Kerman Province