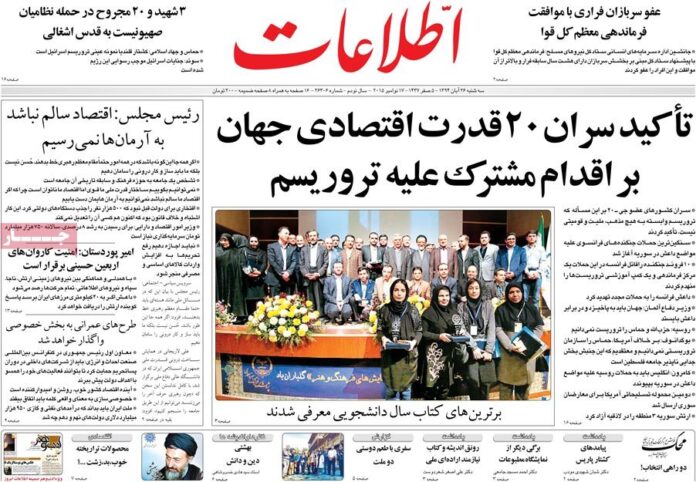 A special look at the headlines Ettela’at newspaper covered on Nov. 17.

♦ Draft dodgers have been forgiven following the Supreme Leader’s go-ahead.

The commander in chief of the armed forces has pardoned those who have dodged conscription for eight years or more.

♦ An attack by the Israeli military against Beit ul-Muqaddas has left three Palestinians martyred and 20 others wounded.

Hamas and Islamic Jihad have denounced the killings as jarring examples of Israeli terrorism.

♦ “In the absence of a healthy economy, we won’t be able to secure our goals,” said the parliament speaker.

Ali Larijani further said under the previous government as many as 500,000 people were hired by state institutions and that practice was wrong and against the law.

♦ The commander of the Iranian Army’s ground forces has said that convoys of mourners [who travel to Iraq to take part in Arba’een mourning ceremony] will be secure.

♦ The private sector is to be entrusted with development projects.

The first vice president has hailed the prospects of the country’s economy as bright and promising.

♦ Top student authors of the year have been named.