Highlights of Ettela’at newspaper on Nov. 16 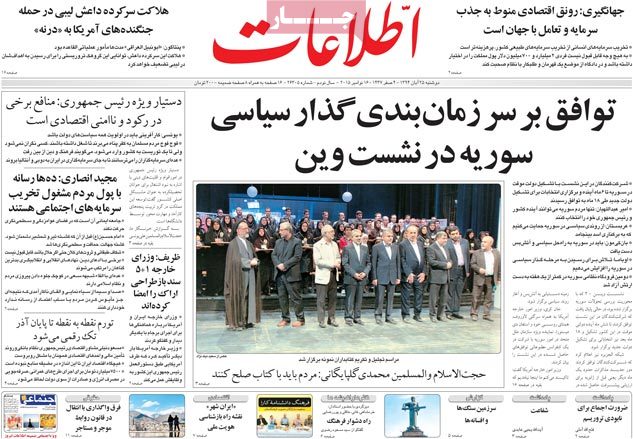 A special look at the headlines Ettela’at newspaper covered on Nov. 16.

♦ The Vienna talks have produced a timetable for political transition in Syria.

♦ The country’s economic boom hinges on inflow of capital and interaction with the rest of the world, said the first vice-president.

Eshagh Jahangiri further said that it is unacceptable to see an individual siphon off $ 2.7b in public funds and then talk in an overbearing, heroic fashion in a court of law.

♦ An IS leader in Libya has been killed in a strike by US fighter jets against Derna.

The Pentagon says Abu Nabil al Anbari was once an Alqaeda operational commander.

♦ Recession and economic insecurity serve the interests of some individuals, said Ali Younesi, a special advisor to President Rouhani.

He further said creation of jobs should be the priority policy of the government.

♦ Scores of media outlets are using public funds to chip away at social assets, the vice-president for parliamentary affairs said.

Majid Ansari further said some are hiding behind religion, revolutionary institutions and revolutionary fervor to commit the worst sins.

♦ Foreign Minister Zarif has said that the foreign ministers of P5+1 have signed a document on the reconfiguration of Arak’s reactor.

It came after Zarif and his US counterpart held talks in Vienna to make the necessary coordination for the implementation of the Joint Comprehensive Plan of Action.

♦ The point-to-point inflation rate will slip into the single digits next month.

Masoud Nili, an economic advisor to the president, said the banking system and provision of finances to businesses are still facing problems.