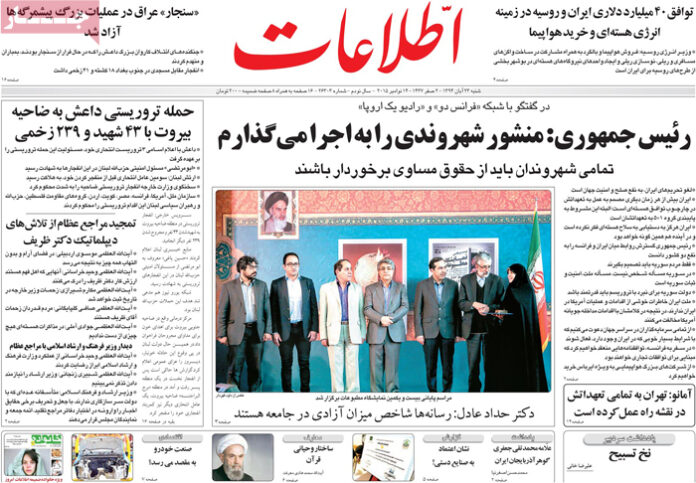 A special look at the headlines Ettela’at newspaper covered on Nov. 14.

♦ “I will enforce the Civil Rights Charter,” said President Rouhani in interviews with France 2 TV channel and Europe 1 radio network, adding that all citizens should enjoy equal rights.

The Russian energy minister has said that his country has many plans for Iran including: selling aircraft and helicopters to Iran, partnership with Iran in making passenger and rail cars, renovation of Iran’s railroads, and construction of units in the Bushehr Nuclear Power Plant.

♦ TheIraqi city of Sinjar was retaken in a big operation by Peshmerga forces.

♦ A terrorist attack by ISIS in Dahiyeh, Beirut has martyred 43 people and injured another 239.

ISIS has assumed responsibility for the attack, releasing the names of its three suicide bombers.

Ayatollah Abdul-Karim Mousavi Ardebili: Everything bears fruit in a calm and tension-free atmosphere.

Ayatollah Nasser Makarem Shirazi: The foreign minister’s efforts will go down in history.

In another development, Minister of Culture and Islamic Guidance met with the sources of emulation in Qom.

♦ Media are a freedom indicator in society, said Dr. Haddad Adel in the closing of the press exhibition.

♦ Director General of the International Atomic Energy Agency Yukiya Amano has said that Tehran has honored all its commitments under the roadmap [of cooperation Iran and the IAEA signed in July].