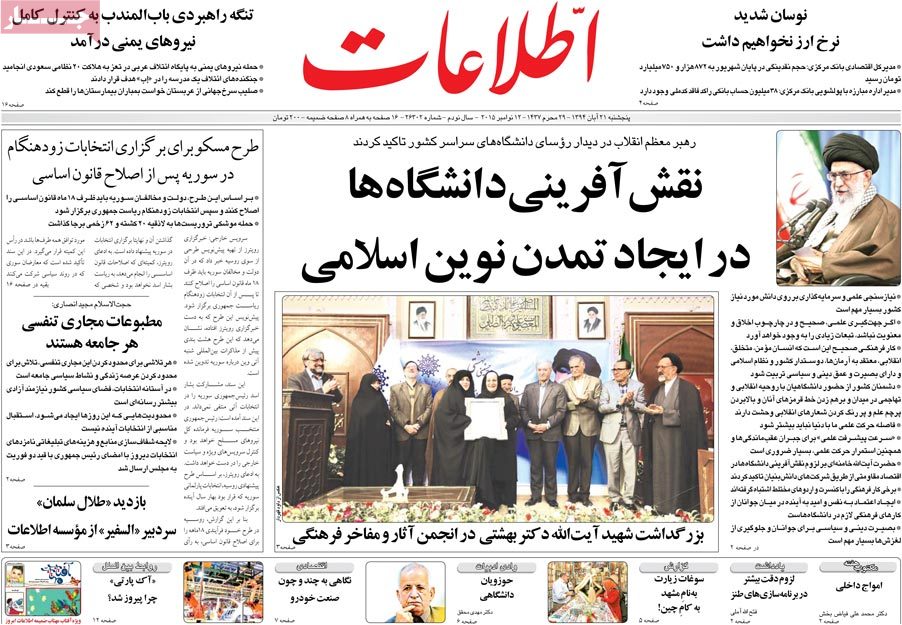 A special look at the headlines Ettela’at newspaper covered on Nov. 12.

♦ The Supreme Leader has underlined the role of universities in helping create a modern Islamic civilization.

♦ There will be no fluctuations in foreign currency values, said a senior official with the Central Bank of Iran.

The CBI’s anti-money laundering chief said that there are 38 million idle bank accounts with no national code numbers.

♦ The strategic Strait of Bab-el-Mandeb is now fully controlled by Yemeni forces.

An offensive by Yemeni forces against a Saudi-led coalition base in Taiz has left 20 Saudi forces killed.

According to the plan, the Syrian government and opposition should agree to amend the Constitution within 18 months before early presidential elections are held.

♦ The vice-president for parliamentary affairs has likened media to the respiratory tract of society.

Majid Ansari said that any attempt to block this tract would limit life and political liveliness in society.

♦ Talal Salman, the editor-in-chief of Lebanon’s As-Safir daily, has visited the offices of the Ettela’at daily.

♦ A ceremony has been held at the Society for the Appreciation of Cultural Works and Dignitaries to honor the memory of Ayatollah Beheshti.