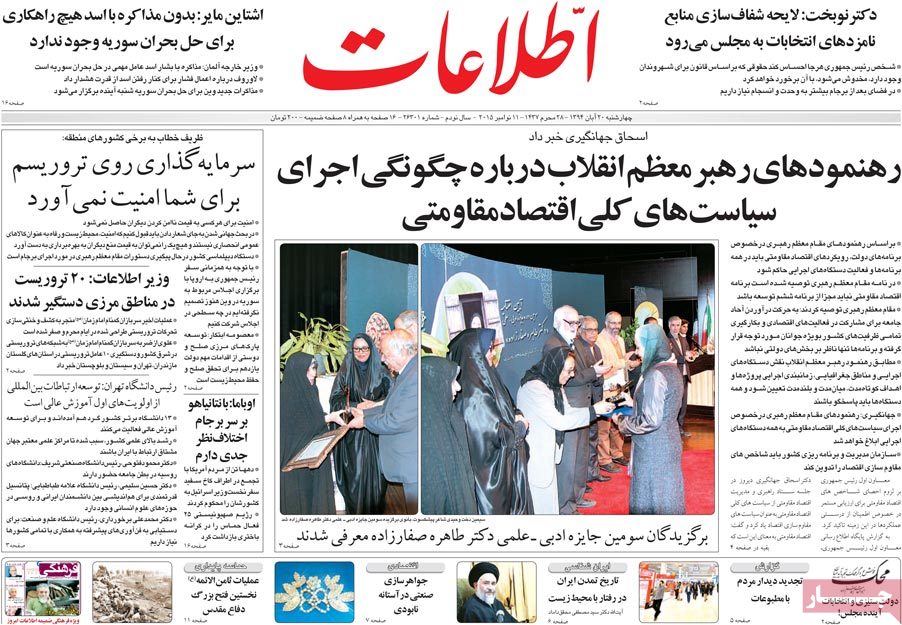 A special look at the headlines Ettela’at newspaper covered on Nov. 11.

Ettela’at: Dr. Mohammad Bagher Nobakht has said that a bill designed to shed light on the campaign finances of parliamentary candidates will be sent to parliament.

The government spokesman further said that the president will step in anytime he feels the rights of citizens as envisioned in the Constitution are being violated.

Ettela’at: German Foreign Minister Frank-Walter Steinmeier has said that there will be no solution to the Syrian crisis unless talks are held with Bashar al-Assad.

His comments came ahead of a new round of Syria talks in Vienna come Saturday.

The top diplomat further said that security for one country does not come at the expense of insecurity for others.

Ettela’at: The intelligence minister has said 20 terrorists have been arrested in border areas.

A recent operation by the Intelligence Ministry agents has foiled terrorist plots which were to be carried out in the mourning months of Muharram and Safar, Mahmoud Alawi said.

Ettela’at: The president of Tehran University has said that expansion of international communications is among the priorities of the higher education system.

Ettela’at: Israeli Prime Minister Benjamin Netanyahu has said he has serious differences with President Obama over the Iran nuclear deal.

Netanyahu’s comments came as scores of people gathered outside the White House to denounce his US visit.

Ettela’at: The winners of Tahereh Saffarzadeh Literary-Scientific Award have been named.