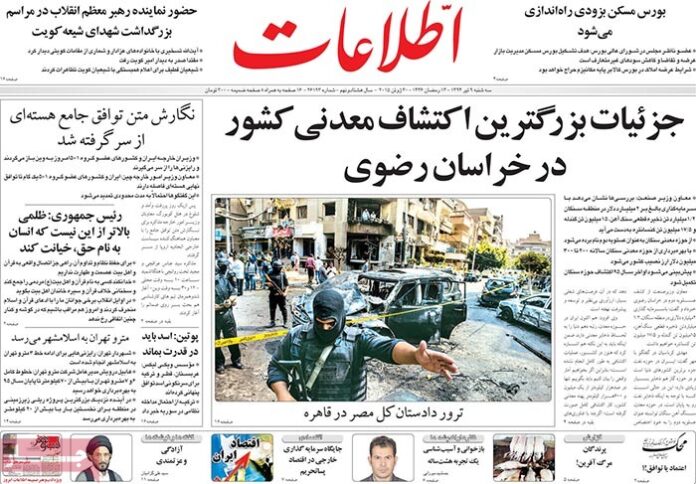 A special look at the headlines Ettela’at newspaper covered on June 30.

♦ The biggest mineral find in the country in Khorasan Razavi Province

♦ Egypt’s top public prosecutor has been killed in a bomb attack in Cairo.

♦ A housing stock exchange is to be launched soon.

The launch is designed to manage supply and demand on the housing market and put a lid on unconventional profits some rake in.

♦ The Supreme Leader’s envoy has attended a service for Kuwaiti Shiites martyred in a terrorist bombing in Kuwait City on Friday.

Ayatollah Taskhiri met with the grieved families of the martyred worshippers targeted in a mosque and a number of Kuwaiti officials.

♦ Meetings to nail a final agreement [between Iran and P5+1] have resumed.

The foreign ministers of Iran and P5+1 will return to Vienna later today to resume nuclear talks.

♦ “No injustice is worse than betrayal in the name of service,” said President Rouhani.

Turkey has said that military intervention in Syria is a possibility.

♦ The Capital’s subway service is to be extended to Islamshahr [a town to the southwest of Tehran].

The managing director of Tehran Subway Company said that two new underground lines will be launched by March 2017.